You’ve probably heard of, and maybe even sampled, Port from Portugal or Italian Moscato D’Asti dessert wines. But did you know that Long Island winemakers are making quality dessert wines right here in our own backyard? As someone who is relatively new to these after dinner beverages, I decided I needed to dive headfirst into what our region has to offer. What did I find? Quality, tasty wines that are truly Long Island in character.

Dessert wines can be expensive – from $25-60 for a 375ml half bottle – and sometimes it’s difficult or impossible to sample them in a winery’s tasting room. In fact, some will only let you try one if there’s already a bottle open. Even though I didn’t get to try a couple of the ones I wanted, including Macari’s 2002 Block E, I still found some unique offerings.

Martha Clara Vineyards in Jameport, known for its fun wine labels and accessible, mostly steel-fermented wines, offers up one of my favorites, the 2002 Ciel (pronounced see-elle). A delectable blend of Viognier (60 percent) and Chardonnay (40 percent) grapes picked at their ripest, Ciel is fruity and sweet without being syrupy. Intense apricots and even a little peach on the nose remain on the tongue, giving way to velvety caramel as it slides down the throat. This is a well-balanced wine with enough freshness to dodge the cloying sweetness of some other dessert wines. I’d like to try pouring a little over pound cake or even over vanilla ice cream.

Moving from Route 48 over to the Main Road, Paumanok Vineyards in Aquebogue currently offers two decidedly different after dinner wines – a 2002 Riesling Late Harvest and a 2001 Sauvignon Blanc Late Harvest. The Riesling (my favorite of the two) has a straightforward apricot nose, a bit like the Ciel, but with hints of oranges and a much richer, honey mouthfeel. This I’d probably drink by itself after dinner and forgo dessert altogether. The Sauvignon Blanc, in contrast, expresses strong tropical fruit both on the nose and in the mouth, particularly mango and pineapple – the result of fermentation in new oak. I suggest serving this with sliced summer fruit.

Bedell Cellars creates one of Long Island’s most unique dessert wine experiences with its supremely popular raspberry wine. Made by combining grape spirits with fresh raspberries, this rich, almost syrupy dessert wine can best be described as tart raspberry puree with a kick. Its nose, taste and finish are all powerfully raspberry – fruit, jam and pie. Drink it by itself or add a splash to your favorite bubbly for an interesting twist on the kir royale.

Unfortunately, Bedell sold out of its 2002 Late Harvest Riesling long before I got there. The fact that it sold out quickly is probably a good clue as to its flavor and quality.

Pellegrini Vineyards, a personal favorite that is notable for its powerful, full-bodied reds, produces an ice wine using Gewürztraminer and Sauvignon Blanc called Vintner’s Pride Finale. This sweet, lush nectar offers citrus and a hint of vanilla and, while rich, offers an almost crisp finish that is very nice. I’d serve this with a plate of cheeses, or on its own. 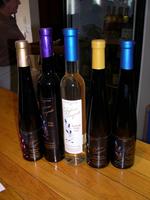 For a one-stop dessert wine tasting experience, I headed to Pugliese Vineyards, which offers five unique and distinct wines. I started with the 2002 Late Harvest Riesling and was blown away by its intense peach character. Imagine the juiciest, freshest peach you’ve ever had with a little honey drizzled over it. Light and fresh, this wine cries out to be paired with peach cobbler or pie.

Next, I tried the 2002 Late Harvest Gewurztraminer, which quickly replaced the strong peach flavors with that of pears and a little spice. A little richer than the Riesling, the Gewürztraminer exhibited more honey and would go well with crème brulee or pound cake.

Pugliese’s 2002 Late Harvest Niagara is the only dessert wine made from native North American grapes on Long Island. The Niagara grape, a close cousin of the Concord, gives this wine a familiar, grapey flavor with hints of tropical fruit and a light freshness. Again, I’d go with a cheese tray with this one.

The only two fortified wines I tasted on this day were Pugliese’s 2002 Rafaello White Port and the 2000 Porto Bello. Both offered a much stronger kick but maintained a unique character that made them unlike any port I’ve had before. The Rafaello is much lighter and fresher than most ports. I’d pair it with poached pears, or even use it to poach fresh pears in.

Made with Merlot and Cabernet Sauvignon grapes, the Porto Bello was much more like other ports I’ve tried, with rich chocolate and black cherry flavors. These flavors were more subdued and balanced than in some Spanish ports. A nice chewy wine, it would be great served with top-quality chocolate and/or cheeses.

While I didn’t get to try every dessert wine that the North Fork has to offer, I tried enough to learn that Long Island winemakers are crafting some truly unique wines that they can be proud of. If you’re put off by the sometimes-too-sweet dessert wines you’ve had in the past, try a few of these, particularly the Ciel and Vintner’s Pride Finale. You just might come to enjoy dessert wines more than dessert itself.