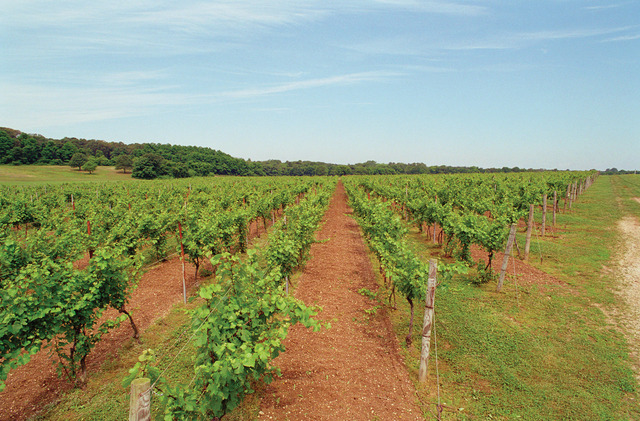 There are many environmental factors that can adversely affect or even destroy a vineyard’s grape crop. From extreme temperatures to phylloxera to animals eating the fruit, vineyard managers have a lot of things to worry about. And over the past several years, Old Brookville Vineyards, the only commercial vineyard in Nassau County, has succumbed to more of these factors than any other Long Island vineyard.

In 1999, the vineyard’s forty-seven acres of Chardonnay were completely wiped out by Hurricane Floyd. Two years later, spring frost and heavy fall rains combined to reduce the crop by 50 percent. The very next year, the same combination wiped out the 2002 vintage.

Located in the Village of Old Brookville, a wealthy enclave on the North Shore, the vineyard is the closest of Long Island vineyards by far to New York City and one of only five remaining farms in Nassau County. It is part of the 127-acre private estate that is home to the international headquarters of Banfi Vintners, the nation’s leading wine importer owned by the Mariani Family, whose purchase put to rest rumors of a pending subdivision at the time

The estate’s classic 60-room mansion, now restored and called Villa Banfi, serves as the company’s headquarters. It was originally named Rynwood by its first owner, Samuel Agar Salvage, who built it on the Gold Coast during the Gilded Age in 1927. The estate was later sold to Margaret Emerson, widow of Alfred Gwynne Vanderbilt. Old Brookville became an incorporated village in 1929, when it had 278 residents, 29 of whom voted on the incorporation issue

The vineyard itself was planted for the first time in 1982 on what had previously been part of the neighboring Youngs Farm on Hegeman’s Lane, which was founded in 1893. When the Youngs had to sell a portion of their 100-acre farm to settle an estate, they sold it to Banfi, at least partially so it would remain in agricultural use. Before grapes were planted, bibb lettuce, potatoes and sweet corn were among the crops grown.

Old Brookville is the only commercial vineyard in Nassau County for a reason. Growing grapes so far west on the Island is difficult. Old Brookville doesn’t share the same microclimate that makes East End vineyards so successful and these less-than-ideal conditions can lead to inconsistent harvests, even though the rich, calcareous soil is well suited to grape growing. Under the direction of enologist Frederick Frank, grandson of the Finger Lakes region winemaking legend Konstantin Frank, the first vintage was released in 1987 to critical acclaim.

This year, Banfi reduced the Old Brookville Vineyard from 74 acres to 20, eliminating vines that had historically not performed well. This reduction in acreage caused a stir in the Long Island wine world, leading some to wonder if Banfi had given up on growing vines in Nassau County.

These are “vicious rumors,” according to Lars Leicht, Banfi’s vice president of communications. “We are still in business and growing grapes in Nassau County, even though Mother Nature did not permit us to make a vintage 2004 Chardonnay.”

What did Mother Nature have in store this year? A freak hailstorm in June caused substantial damage to tender young buds and leaves, and the vines just couldn’t recover over the cool, wet summer. As if that weren’t enough, early migration of grape-hungry birds meant that protective netting stayed in place longer, further retarding grape maturation. The result, while there was some fruit harvested, it wasn’t up to their usual standards, so no 2004 vintage Chardonnay was produced.

Banfi and Old Brookville Vineyards are already preparing their vines for 2005, however, and are surely hoping that Mother Nature smiles upon them next year. Banfi also produces premium wines at its Castello Banfi vineyard estate in Montalcino, Tuscany, which has been declared “International Winery of the Year” an unprecedented four times at the International Enological Concourse held in Verona, Italy.

The Old Brookville 2001 Chardonnay Gold Coast Reserve ($16), vinified at Premium Wine Group, the custom production facility in Mattituck on the North Fork, is still in stock and available throughout the New York Metropolitan area in wine shops and at Gurney’s Inn Resort & Spa in Montauk.

The 2001 was a good, healthy harvest for Old Brookville, despite some May frost, with good sugar content and ideal acidity. 1,500 cases were produced.

I found the 2001 vintage to be versatile and well-balanced. On the nose, it offers pear and apple fruit and slight hints of toasty vanilla. In the mouth, this medium-bodied wine is round, fruity and nicely buttery without being overly oaked or heavy. Not terribly complex, it still features a good, lingering finish with butterscotch and vanilla. It would pair well with roasted poultry and seafood, including salmon.

For more information on Banfi Vinters and to find out where their wines are available, visit www.banfivinters.com. For information on Castello Banfi, visit http://www.castellobanfi.com.