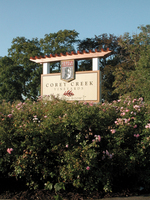 For as long as I’ve been drinking Long Island wines, I’ve always enjoyed at least some of the wines from Corey Creek Vineyards (and it’s sister winery, Bedell Cellars).

Kip Bedell, founder of Bedell Cellars and winemaker at both, is known in these parts as "Mr. Merlot" because of his success with the grape. (You can more about his Merlots.)

Both wineries are now owned by Michael Lynne, Co-CEO of New Line Cinema. This could be a trend out here…big money media types investing in the wineries. Is Puff Daddy next? Lindsay Lohan? Lenn Thompson? (I wish!)

Corey Creek has been producing quality wines for over a decade, which doesn’t sound all that long, but the L.I. wine region is only 30 or so years old. It’s tasting room is a welcoming barn-style building with glass doors that open out onto a deck with great views of the vineyard.

The tasting room staff is always friendly and accomodating as well, more so than at Bedell’s room even…at least in my own experience.

For this tasting, Nena and I compared their two new/current Chardonnay releases, both from the 2002 vintage.

This wine was both fermented and aged in stainless steel, resulting in a light, Chablis-like style. True to it’s steel roots, it’s very pale yellow in the glass, and offers a light, citrusy nose. Pear and faint golden delicious apple join the citrus on the palate.

Lean and refreshing, I would have liked a bit more acidity for food-frienliness. As it is though, I’d gladly drink this with lemon-roasted chicken and other light poultry and seafood. Its $18 price tag is probably a bit high though. 960 cases produced.

Unlike it’s steely sister, the reserve was fermented and aged (for ten months) in 100% French oak, with 75% malolactic fermentation.

The differences are aparent the second the wine gets into the glass, with its rich, golden hue and an impressive nose of fire-roasted marshmallow and buttercream with just the most subtle hints of pears and apples.

Butterscotch and roasted pears blend well with toasty vanilla and honey on the palate. At first I thought oakiness was a little raw, but with a few minutes in the open, that faded. That’s probably the result of a new release and following the steel-fermented version so closely.

Full-bodied, rich and almost creamy, this is an elegant pour that could stand up to richer foods than the regular Chardonnay.