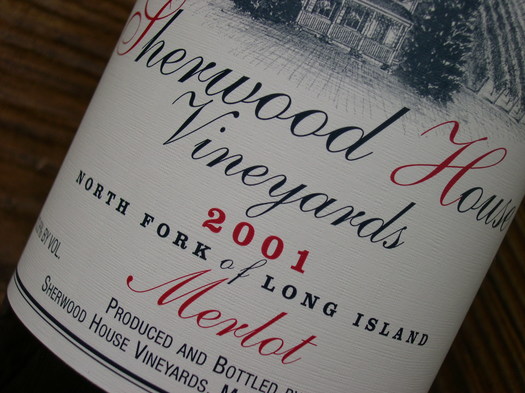 As the resident wine aficionado (or geek) at Dan’s Papers, I’m “forced”
to taste several wines each and every week. In just under a year with
the paper, I’ve already filled up one whole notebook with notes and
comments and have started another. It’s hard work, but someone has to
do it, right?

Through hundreds (thousands?) of sips, I’ve learned that when I taste a
winery’s new releases, I can almost always find at least one I enjoy.
Just about every winery on Long Island has at least one noteworthy
bottling, or at least something that shows potential. It’s truly rare
that I dislike everything I try. This week, as I sampled wines from Sherwood House Vineyards
in Mattituck, something even more rare and extraordinary happened –
both were remarkable and delicious. In fact, for the first time, each
release scored an A- in my blind tasting.

Owned and operated by Charles and Barbara Smithen, Sherwood House
Vineyards is the manifestation of an intense passion for both wine and
the East End. A cardiologist and vintage jewelry dealer, respectively,
they purchased their 1860 farmhouse in 1996 and planted their vines
soon after. In 1999, after selling off their grapes to local wineries
for a few years, the Smithens decided to make their own wine, a
Chardonnay. Since then, they’ve focused solely on Merlot and
Chardonnay, and have developed a bit of a following among those who
have tasted them. After tasting these wines, I’m a believer, too.

The Sherwood House Vineyards 2001 Merlot ($22)
is a well-extracted and rich example of Long Island’s showcase
varietal. The nose offers ripe raspberry aromas with a mineral
background and light oakiness. On the palate, the raspberries are
joined by vanilla cream and more minerals. This medium-bodied wine is
highlighted by sultry tannins, a soft-but-rich mouthfeel and an
indulgent, lingering finish. 600 cases were produced.

While garnering the same grade in my tasting, the Sherwood House Vineyards 2001 Chardonnay ($20)
is even better. A light, shimmering gold in the glass, its nose is
refined and light, offering Bosc pear, vanilla and hints of toast.
Full-bodied but far from heavy, this exceptionally balanced chardonnay
displays lithe pear flavors with hints of tropical fruit as well as
butter, toast and minerals. I don’t think there’s a better 20-dollar
chardonnay on the North Fork and few will cellar as well, either. 645
cases were produced.

Sherwood House
Vineyards will also be releasing its 2002 Chardonnay in the fall and a
2002 Merlot in the early winter. They are also working on their first
Cabernet Franc bottling, which will be released sometime in 2006.