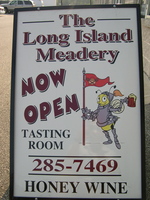 Honey wine, better known in some circles as mead, is one of the oldest alcoholic beverages in the world — dating back thousands of years and pre-dating both beer and wine (grape wine that is).

But despite it’s long history, mead remains a relative unknown among "serious" wine drinkers, often thought of as a beverage consumed solely by people at medieval reenactments and festivals. While it’s true that mead is the drink of choice at such events, it’s an increasingly popular choice for people living in 2005 as well.

Search the Internet, and you can find literally hundreds (maybe thousands) of mead recipes. But the basics are this: honey, water and yeast. In the same way that grape juice is fermented to make wine, honey is fermented to create mead — with the water added to thin the honey to make it easier to drink.

This week, I had a chance to visit Long Island’s only meadery, The Long Island Meadery, which is operated by Paul Holm from a small warehouse space in an industrial park in Holbrook, NY.

Holm, who works for the Long Island Railroad system by day, has been
making mead for many years, starting in his kitchen at home.
Eventually, he was making enough that his kitchen was rendered useless
for anything beyond mead making. That’s when he decided to rent some
space, get some commercial equipment and go commercial with his honey creations.

His
production room looks very much like any other small winery —
immaculately clean, pumps, steel fermentation tanks — and he even has
a fruit press that he plans to use for fresh pears for a pear-flavored
mead. I also noticed a small oak barrel too…which he used for an
oak-aged apple ceyser (mead made with apples is called ceyser).

The main difference is the large buckets of orange blossom honey, which
I would have seen if it all weren’t already in the ferementation
vessels. He sources all of his honey from a farm in Pennsylvania
currently, but has spoken to a few Long Island honey producers about
their product as well. "I’d love to make mead with local honey
sometime," he said.

Because all of his current products are flavored with fruit (either
fresh or preserves) he uses orange blossom because "it goes best with
fruit flavors." But, he’s currently fermenting some clover honey for a
traditional, un-flavored, mead that will be bottled and released this
fall. Each batch takes about three months from start to finish.

I didn’t taste any of Holm’s offerings during my visit, but he gave me three bottles to take home:

Here are my tasting notes.

Nose: Faint honey nose, fruity too but in a foxy, native/hybrid
grape way — reminded me a bit of some dessert wines I’ve tasted that
are made primarily from the Niagra and Cayuga grapes.

Tongue: Much lighter bodied than I expected but not light
bodied either. Also not nearly as sweet as I  expected. Simple, lightly
fruity…reminded me of a Finger Lakes blush made by blending cawtawba and
cagyuga (without the acidity). Some berry character, but I’d be hard pressed to identify it
as strawberry and/or raspberry.  Lingering honey finish.

Long Island Meadery Peach/Apricot Mead
Eyes: Light honey yellow. Could pass for an oak-aged Sauvignon Blanc based on how it looks in the glass.

Nose: Again, light honey…but not much else on this one. As it warmed a bit I could pick up some hints of peach preserves, but it was fairly blank overall.

Tongue: Lightly sweet and vaguely reminiscent of a jug white
wine blend. Has some tart/sour apple-like flavor towards the end and a
less-honey finish than the first one.

Nose: Very similar to the strawberry/raspberry mead with
native/hybrid grape aromas, but this time I can recognize a
little blueberry as well. Smells faintly of a candy store.

Tongue: Seems a bit sweeter than the other two. Again reminds me of
that Finger Lakes blush wine, but without that wine’s acidity. Faint
honey flavors and finish. A bit more coating and syrupy

General Comments: I think Nena put it best after we tasted these
"They aren’t good or bad…they are just different." None of them stood
out as something that I’d drink in lieu of either beer or wine, but I
bet there is a market for them among white zinfandel and wine
cooler consumers. They are more charming than those, of course, but
they are simple, fruity and inoffensive.

I’m curious to try his
traditional, un-flavored, version in the fall…and he has plans for a
sparkler too.