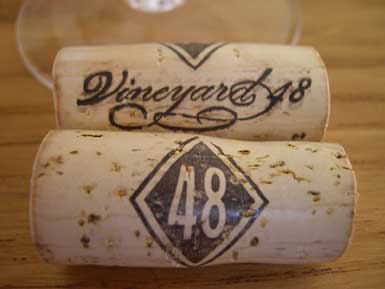 I first introduced you to Vineyard 48 in early May when they released
their first wines under the Vineyard 48 label. Even though Italian-born
Rose Pipia and her son Joseph Pipia had taken over the old Bidwell
Winery in Cutchogue a year before that, the wines were really old
Bidwell stock that was tweaked by winemaker Mathew Berenz and
winemaking consultant Roman Roth of Wolffer Estate. While most of the
releases were palatable, the ten-dollar red table blend was probably my
favorite.

Everyone at Vineyard 48 told me at the time “Just wait for the 2004
releases, they’re going to be great.” And, with a quality winemaking
team, the Island’s second oldest vines and Steve Mudd of Mudd Vineyards
on board to help get them healthy again, I had similarly high hopes
myself.

Last week, Vineyard 48
dropped off samples of four 2004 whites — two different Rieslings, a
Sauvignon Blanc and a Chardonnay. These wines have yet to be released
(but they will be soon) and the bottles were labeled only with Post-It
notes.

I started with the
Vineyard 48 2004 Riesling ($16), chilled only moderately, the way I
think everyone should drink Riesling. 2004 wasn’t a great growing year
for high-acidity whites and this wine shows it. Its austere nose offers
faint pear and apple aromas but is a little flat. With fairly low
acidity, it’s good that this wine was fermented to dryness, resulting
in a gulpable white that does have some good apple and pear flavors.
This is still a young wine that may have been suffering from a bit of
bottle shock. At $16, I hope it opens up a bit.

Next I tried Vineyard 48’s 2004 Semi-Dry Riesling ($18), which
undoubtedly was made with the vineyard’s best lots of Riesling. Much
more aromatic, it offers a similar fruit profile but also brings some
floral and flinty aromas to the glass. The little residual sugar in
this wine is balanced nicely by impressive acidity, making it nearly
imperceptible. Light-bodied, clean and delightful, this was my favorite
of the lot. Quality Riesling goes great with the diverse dishes of
Thanksgiving dinner…and I think this one may make its way onto my table
this year. Spend the extra two dollars and buy this bottling. It’s a
much better value.

The Vineyard
48 2004 Sauvignon Blanc ($15) is still a little young and tight as
well, with a restrained, citrusy nose with wisps of grassiness. Medium
bodied and fresh, it has nice but not overpowering acidity with simple,
but appetizing citrus flavors. Sauvignon Blanc is one white that I
prefer a bit cooler, so don’t be afraid to keep this one in your
refrigerator for an hour or so before serving with local shellfish or
light, flaking white fish.

The
last of the samples, Vineyard 48 2004 Chardonnay ($30), stands out from
this group both because of its price and its considerable oak
influence. Medium-light gold in the glass, its young nose is ruled by
sweet oak aromas and with only a little roasted apple buried
underneath. This Chardonnay is full-bodied and tongue coating, with
oak-infused flavors like sweet vanilla and toasted coconut dominating
the palate. Because of a sprinkling of acidity, it’s not flabby like
many heavily oaked wines, but it’s not balanced at this young age
either. This wine has potential, but as it’s drinking now, I don’t
think it’s worthy of a $30 price tag.

Vineyard 48 has become a popular destination on Route 48, offering live
music most weekends. For more information, call 734-5200.These wines
will be released soon, so go check them out for yourself. Me…I’ll stick
with the semi-dry Riesling for now.