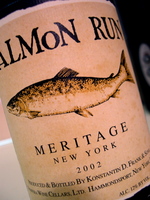 Dr. Konstantin Frank Vinifera Wine Cellars is one of the best-known wineries in New York’s Finger Lakes region — mostly because their rieslings are top notch and among the best (if not they best) produced in the U.S.

Salmon Run is Dr. Frank’s second label and the bottlings top out at about $13 per bottle, making them among the best every day drinking values I’ve encountered.

This Salmon Run 2002 Meritage ($13) is a blend of merlot, cabernet franc and cabernet sauvignon, and while I couldn’t dig up any information on where the grapes came from, listing "New York" on the lable rather than the Finger Lakes probably means there’s some Long Island juice in here..

Nena made some homemade pizza last night with turkey sausage, sauteed veggies and mozzarella, so I thought I’d open this bottle up and see how it was.

Nose: I expected a fruit-dominated nose for some reason, but smoke and cloves mingle with the berry-plum aromas

Tongue: The palate is similar to the nose, with low tannins (and acidity) and soft, medium-bodied mouth feel. I think there may be a little residual sugar because the finish is a little sweet and short, which keeps this from being what it could have been.

Comments: I’ve never been blown away by a Finger Lakes red, and this wine continued that trend. This is  simple, but not as simple as you might expect at this price. The sweetness on the finish turns me off a bit, but this is obviously meant as a gulping red and it would be good to serve at a party with non-wine geeks. It was okay with the pizza though…the clove/smoke went well with the sausage.