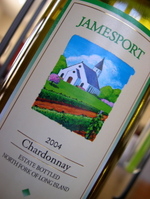 2004 was only an average growing year on the North Fork of Long Island, but Ron Goerler, Jamesport Vineyards’ owner and vineyard manager, spoke highly last spring of his chardonnay (and cabernet sauvignon) grapes. He’s well-regarded as a grape grower and his reputation is actually part of what attracted winemaker Les Howard to Jamesport Vineyards.

When I first met Les last year, he stated a desire to make well-balanced wines first and foremost because "Spikes of oak or acidity
numb your taste buds, shortening the finish."

So what about this 2004 Cox Lane Chardonnay?

Just over one-third of the fruit was fermented in steel tanks, while the remaining grapes were fermented in one- and two-year old oak barrels, leading to an oak-inflected, but not at all oak-dominated wine.

The nose is lemony, with toasted marshmallow aromas. The winery’s website describes this wine as "more like California" but I found it much more Burgundy than Napa. When chilled, it was lean, with citrus and crisp pear flavors that develop into richer baked apple and caramel as the wine warms a bit.