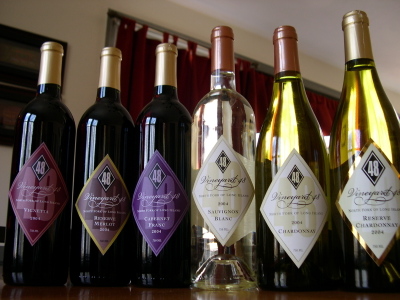 Late last summer, I got my first taste of Vineyard 48’s first new wines(as opposed to the old Bidwell stock they sold under their label), all not-yet-released whites from the 2004 vintage. The best of the lot was a nicely balanced semi-dry Riesling, but the others seemed either taut and un-yielding, or a disjointed.

A little over six months later, I decided to re-taste a few of the whites along with three newly released 2004 reds — and there is reason to keep an eye on Vineyard 48.

The first of the re-tasted whites, Vineyard 48 2004 Sauvignon Blanc ($14) has a lean nose dominated by grapefruit and lemon zest accented by typical grassiness. It is medium bodied with lemony-citrus flavors and just a touch of minerality. Some of the acidity has faded in the half year since I last tasted it, but it’s still a pleasant, if simple, dry white.

The Vineyard 48 2004 Chardonnay ($15) is fresh and fruity on the nose, offering pear, peach and faint toasty notes. The palate begins with a luscious burst of juicy ripe apple and slightly tropical flavors with a little crisp acidity, with obvious oak aging bringing some toasted oak flavors towards the finish. I could do without the oak, but it’s not offensive or overdone.

Perhaps the most un-balanced wine of my initial tasting was Vineyard 48’s 2004 Reserve Chardonnay ($30). But, the wine has definitely developed with a little bottle aging. Satisfying toasted almonds and grilled pineapple have replaced heavy vanilla and oak aromas, and while oak influence is still substantial, it seems softer and creamier on the palate. The pineapples carry over from the nose and are accented by toasted marshmallows and a long, somewhat crisp finish. Six months ago, I thought the thirty-dollar price tag was a little preposterous, but this wine is starting to come around. I think I like this one.

I love the rich and often pretty aromatics that the Cabernet Franc grape can offer, and Vineyard 48’s 2004 Cabernet Franc ($28) is no different. Beautiful strawberry, red raspberry and anise aromas waft up out of the glass. Unfortunately, the palate isn’t quite as elegant and lovely. The fore palate is aggressive with charred oak and tannins that give way to nice berry flavors and eventually a fine, lengthy finish.

The star of the reds is the Vineyard 48 2004 Vignetta ($25), which is much more approachable and elegant. The nose is complex, mingling tart cherry, cranberry and leather aromas with cinnamon stick and earth dried leaves. Plummy fruit flavors greet the palate with soft, fine oak and tannins and excellent earthiness. This Bordeaux-style blend of fifty-percent Cabernet Franc, thirty-percent Cabernet Sauvignon and twenty-percent Merlot was my favorite wine of this entire tasting.

While many wineries are just now releasing 2002 Merlots, Vineyard 48 has released its 2004 Reserve Merlot ($35) and its youth is hard to miss. Extremely tightly wound, it takes time to coax anything but the faintest aromas of blueberries and earthy damp soil from the wine. The palate is similarly reserved, but does display refined tannins that are ripe and well incorporated. Right now there are just some dusty, earthy flavors and little fruit. I think this wine warrants tasting again in a year or two.