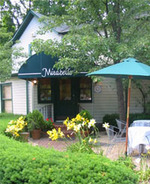 Saturday night, Nena and I enjoyed what I would term, without reservation, the best meal we’ve ever eaten at a restaurant.

A bold statement to be sure, but Mirabelle in St. James is deserving of this and any other praise it receives.

Wanting to spoil ourselves a bit, Nena and I decided to enjoy their eight-course tasting menu, which is a steal at $80.

The captain and chef were both very accomodating when I explained my shellfish allergy and seafood aversion and they happily substituted two fo the eight dishes for me.

For her first course, Nena had a trio of scallops, which included a seared scallop with pickled papaya, scallop mousse with soy sauce, and scallop ceviche with frisee. She loved the seared scallop and liked the ceviche well enough, but thought that the soy-based sauce overpowered the mousse. My first course was grilled asparagus salad with quail egg, frisee and dijon vinaigrette. Light and flavorful, it was a nice opening to my meal.

Neither of us had ever heard of barramundi,
but Nena’s second course was a expertly seared piece atop a
carrot-lemongrass broth spiced with cardomom and ginger. After a mixed reaction to
her first course, this course knocked Nena’s socks off. She went on and
on and on about it. I had a similar response to the herbed gnocchi with
asparagus, petite peas and wild mushrooms. I’ve never had gnocchi so
feather light.

Course number three was Nena’s first foray into foie gras (I’d only had it one other time). It was seared and served with a Long Island duck spring roll, mushroom duxelle and a sweetly-delicious orange-onion marmalade. The dish’s balance — sweet, sour, rich, crisp, earthy, fruity — was outstanding. To call Nena a foie gras fan would be a severe and unfortunate understatement.

Pepper-crusted loin on venison with apple chutney, fennel puree, porcini mushroom and potato gratin was our fourth course. The vension was perfectly cooked and spiced (enough pepper that you could taste it but not enough to overpower the meat itself) and the accutrements again brought tremendous balance of flavors. I could eat this dish every day.

Next was the cheese plate. I didn’t take any notes or pictures (obviously) so I don’t remember the cheeses by name, but two were goat milk and two were cow — all served with toasted walnut raisin bread. I love cheese and cheese courses. My only complaint here was that they served tawny port with this course, but the cheeses were all very mild (three of the four in particular) and the port really overpowered them.

Sorbet came out next — raspberry for me and coconut for Nena. This was the most eery of courses because not ten minutes before it came, Nena said "I wonder if the sorbet will be something cool like coconut." I didn’t think anyone heard her, but perhaps they did. Both were intensely flavored and refreshing.

The souffle of the night was vanilla-chocolate chip with chocolate creme anglaise. Yum.

Getting rather full but still eagerly awaiting our final dessert, Nena was presented with Mirabelle’s take on berry shortcake and enjoyed tapioca with cocoa sorbet and a pistachio crisp. We shared each others dessert, but I think we both liked mine a little better.

The service was top notch throughout the entire meal. The staff was attentive but not overbearing and we felt like we were their sole focus despite the full dining room. And the pace of the meal was just perfect. I think we were there for just under three hours.

As I alluded to earlier, my only negative comments relate to the wine tasting flights that were meant to pair with the different courses ($35). I don’t have the names in front of me, but the wines, while good, were merely pedestrian compared to the food. And, they didn’t change the tasting flight in accordance to the changes in my meal, with the most glaring problem happening with the first course. They served a New Zealand sauvignon blanc, which was ideal for Nena’s scallops, but with my asparagus? Not so great.

That said, the Macon Villages and Cotes du Rhone they served with the second and fourth courses respectively were nice wines that complemented the food nicely. And the Sauternes with the foie gras seemed okay.

I would recommend Mirabelle to anyone. In fact, in the past three days I’ve told at least a half dozen poeple that they need to check it out. I know we’ll be back…but we’ll probably order wine by the bottle. Their list is impressive and I wish they’d dug a bit deeper for our flights.