Every week, I get emails asking for advice on which wineries to visit or wondering which local wines I’m really enjoying that week. Truthfully, I always find these emails hard to answer because wine tastes are so individual and personal. My tastes may, and probably are, different from yours.

Yes, I love the floral, spicy-citrus zing of Corey Creek’s 2004 Gewürztraminer ($25) but that doesn’t mean you will. (For instance, Nena isn’t a big fan.)

So, every time my wife and I visit wine country, we try to take a different path so that we taste different wines and meet different people.

But what’s a “typical” winery jaunt?

Last Saturday, we started at Roanoke Vineyards, where we enjoyed chatting with owner Rich Pisacano and sampling his 2003 reds, which were impressive and invitingly complex. Right now, my favorite is the elegant, aromatic, Cabernet Franc-dominated Blend Two ($36) but his Cabernet Sauvignon ($40) and Cabernet Sauvignon-dominated Blend One ($30) have excellent potential as well. Made by Roman Roth of Wolffer Estate, where Rich is vineyard manager, these wines are drinking well now, but will reward those patient enough to cellar them for another 3-7 years.

It was lunchtime by the time we left Roanoke, and we decided against Farmer Bar (4805 Depot Lane, Cutchogue), our favorite spot for a casual lunch of barbecue, sweet potato fries and fried green tomatoes. Instead, we stopped in at the Piping Plover Cafe & Gourmet Market (53345 Main Road, Southold) for a quick bite. We waited half an hour for two cups of soup and two salads, but my Thai beef salad with sweet chili vinaigrette was delicious and I like any place that uses un-ground beef in its chili. Severely under-ripe tomatoes detracted from our salads, however and should have just been left out.

Heading back up to Route 48, we tasted some delectable olive oil in the foyer at Castello di Borghese before heading into the tasting room. Castello di Borghese’s 2002 Reserve Pinot Noir ($35) is still among the best local renditions, with supreme balance. I also got my first taste of their Hamptons-priced 2001 Private Reserve ($195 per 1.5L magnum). A refined, nuanced and pretty wine, I only wish it were even remotely affordable. 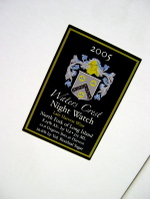 To end our early spring Saturday enjoying the North Fork, we attended a launch party at Waters Crest Winery for Waters Crest Winery 2004 Night Watch ($45), a luscious dessert wine made with frozen Gewürztraminer, Riesling and Chardonnay grapes. It is named “Night Watch” because winemaker Jim Waters did just that — watched it all day and night for four full days (without sleep). He’s since recovered from sleep deprivation and the fruit of his labor is a rich, intricate dessert wine that is sweet, but with just the right acidity to keep it from being heavy. Coincidentally, the party was catered by the Piping Plover Café, and the duck quesadillas were outstanding — especially with Jim’s 2003 Cabernet Franc ($30).