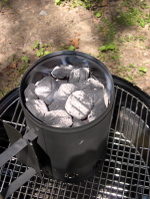 Saturday, I fired up my smoker for the very first time. Her maiden voyage if you will.

Around noon, with my spare ribs trimmed, slathered and rubbed, I fired up the chimney starter and got the charcoal and wood chunks (hickory) ready in the bottom of the Weber.

I’ll tell you what, I obviously don’t have a lot of experience with different smokers, but this thing is almost fool-proof. Once I had everything set up (talk about mise en place…lots to do preparing for a smoking session), it was largely mindless. With the water pan (which holds a gallon of water) keeping the temperature fairly constant, I didn’t have adjust the vents much at all.

And as you can see here, I was right in that 225-degree sweet spot and was there for much of the six hour cook.

I will admit, shamefully, that I’m not usually much of a rib eater. Perhaps it was just the vast amount of bad, largely meatless ribs I’ve had in my life. I have always said that chicken is a much better vehicle for bbq sauce (when you’re eating ribs that are thing on meat, it’s all about the sauce, right?). But, by inviting John and Al over for the BBQ, I had some experienced rib lovers on hand. Plus, Nena loves em too. 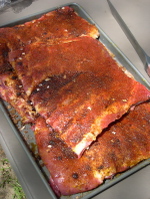 Robert of WhiteTrashBBQ fame gave me some basic recipes and guidelines for cooking using the Weber, but of course I changed the rub recipe some because I just can’t help myself. I used less regular sweet paprika and added Spanish smoked to make up the difference. Instead of onion flakes, I used some dried minced shallots I had on hand. And I omitted the cayenne because my guests have tender tongues. At right you can see the ribs just before they went into the smoker.

Again, once everything is set up and the smoker is closed, it’s really pretty easy. I checked it once an hour (just the temperature, I did a good job of fighting my incessant urge to open and peek inside), did three hours on the smoker, took them out, wrapped them in foil with a little apple juice, bourbon, dry rub mixture, and cooked them like that for two hours, and then for one last hour without the foil before serving.

The finished product, I’m proud to say, looked great and was deemed "very very very good" by our guests.

But, just as with any other cooking endeavor, I wasn’t completely satisfied (and never will be).

So, what will I do differently the next time?

First, I’ll track down some apple, peach or cherry wood. I didn’t read until after cooking that few use hickory by itself and I can see why…it resulted in a bit of a raw wood flavor I think. No one else seemed to mind though.

Secondly, I really want to use some different stuff in the rub. While tasty, I think some other spices (allspice, cumin and cinnamon) would really be interesting. I can’t help myself…I never make anything the same way twice (which is good and bad of course).

As for drinks…I picked up a few bottles of bargain zinfandel (12-bucks or cheaper). The best was Gnarley Head Old Vine Lodi Zinfandel ($12). I didn’t take notes, but it was definitely the best of the lot…intense, peppery and delicious with the ‘cue.