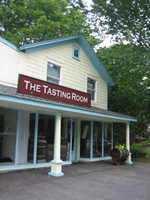 This weekend, the
owner of a winery who used to sell wine through the two locations is
re-opening the Peconic location under the same name.

Theresa Dilworth of Comtesse Thérèse, who will run the operation, is
The Tasting Room’s third owner in nine months. Founded by the Merediths
in May 2003, The Tasting Rooms in Peconic and Jamesport were acquired
by Leucadia in October 2005. Leucadia operated the cooperative tasting
room concept from November 2005 until March 2006, at which time both
Tasting Room locations were abruptly closed, much to the chagrin of
local winery owners and wine lovers.

Not only has Dilworth re-opened one tasting room location, she’s
increased the number of wineries involved. Participating wineries
include Comtesse Thérèse, Diliberto Vineyards (a real coup if you ask me), Schneider Vineyards,
Sherwood House Vineyards and Ternhaven Cellars.

“The Tasting Room is a way for small wineries like myself, who cannot
afford our own tasting rooms, to pool their resources and offer wine
tastings and sales in a single location,” said Ms. Dilworth. Comtesse
Thérèse, a ten-acre vineyard located in Aquebogue that is owned by
Dilworth and two business partners from Japan, is the only all–female
owned vineyard on Long Island. Dilworth is also planning to open a
bistro in Aquebogue featuring an exclusively Long Island wine list and
locally grown foods.

“Both Diliberto and Ternhaven fit the profile I was looking for, which
is small quantities of hand-crafted, boutique, North Fork of Long
Island wines,” said Dilworth.

Dilworth is looking to expand the roster of wineries even further, and
may be adding more in the next month or two. Most of the participating
wineries produce fewer than 1000 cases annually, with lot sizes of
individual wines ranging from 50 to a few hundred cases.

The new Tasting Room will occupy only half of the original Peconic
location. The other half will house newcomer North Fork Wine Cellars,
owned by Stephen A. Distante, a Peconic resident who is also CEO of
Vanderbilt Securities of Melville, New York.

North Fork Wine Cellars, which plans to open July 1, will offer custom
wine cellars and wine refrigerators, glassware, and accessories, in
addition to winery tours and wine education. Christopher Watkins,
previously the manager of The Tasting Room when it was operated by both
Broadfields and Leucadia, will continue as manager of both The Tasting
Room and North Fork Cellars. The former Tasting Room location in
Jamesport has been converted to Leucadia’s regional vineyard office.
The Tasting Room, located at 2885 Peconic Lane in Peconic, will be open
Friday – Sunday, 11 a.m. to 6 pm. For more information, call
631-765-6404.