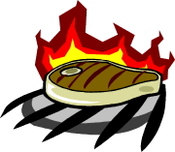 I absolutely love cooking with fire and this weekend, Nena and I are hosting what will probably be our biggest party of the summer. It’s only 13 people, but with all that we have going on these days, it seems pretty big anyway.

Now, I don’t plan dinner parties that are anywhere near as ellaborate as the Obsessed One, but I do try to introduce our sometimes culinarily-challenged friends to some new things every time out (while keeping some old standards around as well). So, I do a fair amount of menu planning ahead of time — and one certainly has to when one of the centerpieces of the meal will require 12-14 hours to cook.

So as I started to let the menu bang around in my head, beginning with appetizers, I knew that I had to make my famous-in-my-own-circle grilled wings. Oddly enough, I don’t think I’ve made them with the same sauce twice (and I’ve made them at least 20 times in the past couple years).

I’m also going to experiment a little with some grilled tacos filled with mashed potatoes and Manchego cheese. I seem to vaguely remember reading about something like this somewhere, but I can’t find the recipe anywhere at home. So, I’ll be branching out on my own — which is normal. I often draw inspiration from cookbooks, but rarely follow recipes.

I’ll be rounding out the appetizers with grilled pizza of some sort — though I don’t know what kind just yet. May be a last-minute, pantry-cleaning pizza.

For entrees, I’ve only made pulled pork once in my smoker, but I I want to work towards perfecting it. So that is a must for this gathering. The first time around, I used rub/technique advice from WhiteTrashBBQ, but this time I think I’m going to change a few things up. Okay, I’m going to change everything up just to see how it turns out.

Unfortunately we have a few attendees who don’t eat pork (I know…it’s crazy). For them, I’ll be making some sort of burgers.

The sides will be pretty traditional for BBQ. Nena is making macaroni and cheese, I’m going to grill some corn on the cob. But, Nena is also making this tasty broc-walnut salad we had at her parents’ house once.

For a change, I might actually take pictures of the preparation and the party itself. No promises though. Once the local beers and wines start flowing…I’m easily distracted.