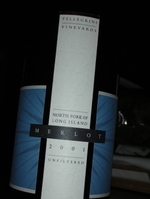 With the recent 2006 vintage, Pellegrini Vineyards in Cutchogue
celebrated its 15th year. Australian-born winemaker Russell Hearn is
known for making flavorful wines that tend to be good values in a local
industry that is too often plagued by over-priced, under-delivering
wines.

True to his Australian pedigree, Hearn applies some of Long
Island’s most cutting-edge techniques, but he doesn’t try to make
Aussie-style wines — thankfully.

Pellegrini Vineyards also makes enough wine every year that
they don’t need to rush their wines to the store shelves. This wine is
an excellent example of that.

While many wineries are releasing
merlots from 2003 or even 2004, Hearn is only now releasing his 2001 —
a truly impressive wine from one of Long Island’s best ever vintages. If you see a 2001 red on a store shelf, buy it. It’s that simple. Even some of regions lesser producers made solid wines that year.

Bottled unfiltered, this merlot is dark and dense in the glass
with a plentiful nose of dark fruits — think ripe blackberries,
blueberries and plums — with notes of vanilla and anise. Fruit-forward
with ripe, full flavors, it displays delicious but not jammy blackberry
and black cherry flavors, hints of vanilla, licorice, eucalyptus and
black pepper. Ripe but medium-firm tannins provide structure and hint
at a long cellar life.