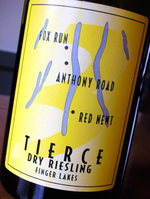 But, LIMA isn’t the only group of New York wineries working together to create special wines from other signature grapes.

There are some that will argue the point, but much like merlot is Long
Island’s current leader, the classic riesling grape rules the Finger
Lakes region in central New York. What makes the Finger Lakes region so
special is that—all things being equal—classic vinifera grapes
shouldn’t even grow there. They have cold, harsh winters and “winter
kill” vine damage remains a concern.

But, lucky for those of us who enjoy the fresh, aromatic wines made
there—and those growing and making them—the very lakes that give the
region its name make it all possible. These extremely deep, narrow
lakes gather and hold a significant amount of heat in the warm summer
season—enough to extend the grape-growing season into the fall just
enough to ripen grapes as well as protect vineyards against potentially
catastrophic early frosts.

As with any region—including our own—quality varies from producer to
producer. And, in a region like the Finger Lakes, which is polluted
with a great number ‘festival’ wineries that can seem more interested
in hosting large event events and selling t-shirts than making fine
wine, you can taste a lot of one-dimensional, simple, unbalanced
rieslings before you get to the best—which are world class.

It was smart for winemakers Johnannes Reinhardt (Anthony Road), David
Whiting (Red Newt) and Peter Bell (Fox Run) to combine their
considerable talents. Not only does Tierce, which is also bottled under
a screwcap, help promote the region’s signature grape, but the result
is a riesling that goes well beyond the sum of the parts. That’s no
small feat considering how good their individual wines can be.

2004 Tierce ($30) is clean and focused effort from the moment you crack
open that screwcap closure. In the glass, it’s an extremely pale,
crystal-clear greenish.

The aromatic nose starts with a burst of fresh-squeezed lime with hints
of lemon zest and distinctive wet stone aromas. The technical notes say
that there is .2% residual sugar, but you can barely perceive the
sweetness because of fresh, lively acidity. Lime and mineral flavors
burst in the mouth and remain on a long, citrusy, slightly snappy
finish. Fewer than 100 cases were made as a bit of a trial run, but as
good as this wine is, I know that I hope they continue for years to
come.

With so little made,
there probably isn’t much left, but fear not—the 2005 bottling will be
released in May, according to Bell. Much like it was here on Long Island, 2005 was a
hot year in the Finger Lakes, so it could be an outstanding wine.