As
someone who lives just west of the North Fork, I’ve explored the North
Fork dining scene much more than I have the Hampton’s scene. I’m also
much more interested in the food, wine and service than I am any sort
of Hamptons people-watching or soulless scenes.

On a recent visit to 1770 House
in East Hampton, however I was given everything that I wanted and nothing I
didn’t.

Joined by my good friend M, we arrived a few moments
ahead of schedule and were greeted by a friendly, but not fawning, host
and escorted through a warmly decorated lounge and to our table. The
décor in the dining room balances upscale sophistication with casual
elegance. This sort of balance actually became a theme of sorts for the
entire evening.

Seated in surprisingly comfortable wicker
chairs, we were promptly presented with menus and the wine list. After
some perusal, M and I thought we knew what we wanted until our server,
who was attentive and engaging without being in our faces, mentioned a
tasting menu with paired wines. Any time that a chef wants to walk you
through his menu—displaying more of his talents than a few dishes could
convey—I recommend doing it. You won’t be disappointed. At least not if you do it at
1770 House under the watchful eye of chef Kevin Penner, formerly of
Della Femina, and Matt Birnstill.

Before
our artful culinary journey even began, we were brought some of the
best sourdough bread I’ve had outside of San Francisco. Delicately
crisp on the outside, tender on the inside, it served as a nice preface
to the meal.

Our amuse bouche, a small appetizer meant to
tease your palate and prepare it for the meal ahead, consisted of a
gazpacho shooter and a micro salad of watermelon, cantaloupe, cherry
tomatoes and Manchego cheese. Eating poorly made gazpacho is a bit like eating mediocre
salsa, but this was one of the best renditions I’ve tasted. It was
flavorful, gently spicy and brought together the freshness of cucumber
and tomato with a wonderful texture. The salad, with high notes of
basil and sweet melon, was a welcome coolant for the spice of the soup.

My
first course was a black-pepper rubbed, flash seared sashimi of bluefin
tuna with a salad of mandarin orange segments, fennel, ginger and soy.
The fatty, almost buttery texture of the sashimi was brightened the
spicy black pepper and balanced by the fresh, clean flavors of the
salad beneath.

M’s first course, a tartare of wild Alaskan
salmon, Daikon radish sprouts, jalapeno pepper and yuzu was similarly
well balanced. Both were paired with a 2005 Albarino, from Lagar de
Cervera in the Rias Baixas region of Spain. The wine was served too
cold, but as it warmed, the ripe fruit and lengthy finish worked well
with our dishes.

Continuing
with the seafood theme, I was brought an impeccably cooked piece of
salmon atop a mélange of bacon and fennel and a sunchoke puree. The
flavors and here were exquisitely balanced and it paired wonderfully
with a glass of Talbott ‘Sleepy Hollow’ 2004 Chardonnay. Again, the
wine was served a bit cold, but a few moments in my hand brought it up to the proper temperature.

M’s
second course, striped bass with pork belly and mushrooms was "put your
fork down and lean back good." That’s all that has to be said. 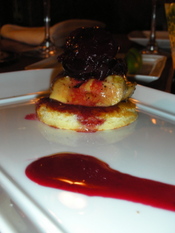 Leading
into our third course, our server mentioned "We’re known for our foie
gras." If you like foie gras as much as I do, these words bring delight
before the rich, delicious foie even makes it to the table. M’s foie
gras was served on a round of brioche with a caramelized peach
tart and ginger reduction sauce. Mine was served on a slightly sweet
pancake with a red wine, vanilla cherry gastric. It really goes without
saying that both portions of foie were well seared and the
accompaniments both cut the richness and heightened the flavors. I’m
not typically a fan of sweet wines in the middle of a meal, but it’s
hard to argue with the choice to pour us Inniskillin’s 2003 Vidal Ice
Wine from the Niagara Peninsula in Canada. Inniskillin is a revered
maker of ice wines—and with good reason.

The
meat course featured one of the items we were going to order anyway-leg
of lamb with spaetzle and figs, a combination that worked amazingly
well and accented the meatiness of the lamb exceptionally. While M
worked on that, I enjoyed a perfectly cooked grass-fed strip steak over
a simple arugula salad with porcini mushroom risotto. I’ve come to love
grass-fed beef of late (it tastes markedly different than cattle fed
corn or other products) and this was probably the best piece of beef
I’ve had in a long, long time. The wine pairing, a Vistalba ‘Corte C’
2004 Malbec from Argentina was just okay and the bottle may have been
open a bit too long.

To cleanse our palates, we were brought
lemon and raspberry sorbets—made at sister restaurant Citta Nuova—and
then we were brought two very different desserts. Mine, a traditional
chocolate cake with panna cotta ice cream, was good if a bit typical
given the inventiveness of the rest of the menu. It did come with
a shooter of chilled hot cocoa, which was a nice touch.

M’s dessert was
an almond cake made with local strawberry and served with crème fraiche
ice cream and strawberry puree. M isn’t typically a cake lover, but
this was an exception. Our final wine of the evening was Niepoort
Colheita 1986 Port, a nutty, sweet wine that probably worked better
with my chocolate cake than M’s dessert.

If you’re looking for
a casually elegant meal with some of the best food in the Hamptons, you
must make a reservation at the 1770 House. The overall experience was
exceptional and it’s hard to imagine a better dining adventure.