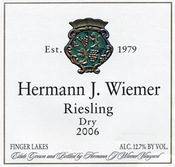 One of the most heralded wineries in the Finger Lakes is entering its second phase of existence. Hermann J. Wiemer announced earlier this month that he has entered a business arrangement with winemaker Frederick T. Merwarth and that Merwarth will run Hermann J. Wiemer Vineyards and its winemaking, vineyard, and nursery operations. Wiemer will continue to contribute in an advisory role.

Hermann Wiemer was not the first to grow vinifera in the Finger Lakes, but he was among the first. He is best known for bringing Old World winemaking sensibilities to the Finger Lakes. The boutique winery Wiemer founded focuses upon time-intensive techniques that reveal the often subtle flavors that are inherent in grapes grown in a cool region. A native of the Mosel region of Germany, Wiemer learned firsthand how to make good riesling and his wines exhibit a great deal of expertise with this varietal.

Noting the immense knowledge that Wiemer has passed on to him, Fred Merwarth has no immediate desire to make major changes at Wiemer Vineyards: "I hope for a seamless transition," Merwarth told me.  "I will stick with what I have learned from Hermann and take his 35 years of experience and work within those boundaries." While he will continue to produce the same varietals for which Wiemer Vineyards is known and celebrated, Merwarth hopes to add Grüner Veltliner to the Wiemer catalog sometime in the near future.

The Finger Lakes is a relatively young wine region, yet many of the well-known wineries are entering their third or fourth decade of existence. Slowly but surely, many of the Finger Lakes wineries that were among the first to emphasize vinifera are being passed to younger family members or younger winemakers. New wineries are being founded that are dedicated almost solely to vinifera.

Change is inevitable under these circumstances, and the cast of Finger Lakes winemakers looks more and more different every year. The transfer of Hermann J. Wiemer Vineyards is a major indicator of this generational change.

"The next generation of winemakers are at an interesting point in the history of the Finger Lakes," Merwarth reflects. "We will decide the direction of the region with respect to planting locations, varieties, wine styles, and, ultimately, quality. We must all continue to promote consistency in our wines in order to keep building the positive reputation of the Finger Lakes."