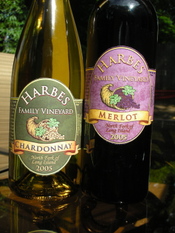 Harbes is one of the most recognizable names on the North Fork of Long Island.

And, Harbes Family
Farm in Mattituck is a one-stop-shop for the North Fork agri-tourism experience. There’s the pick-your-own berry operation, which is
always fun and a great way to get the freshest berries possible. Cross over Sound Avenue and you’ll find an array of plants,
including annuals, perennials, hanging baskets and–as we head into
fall–mums.

This main farm stand also offers delicious baked goods (the
baguettes are great), locally made jams and hot sauces, as well as
picnic tables, a place for children to play, a corn maze and live music
regularly. Harbes is also home to one of the North Fork’s most popular
fall festivals, which provides pumpkin pickers with a corn maze, hay
and pony rides and candy apples.

Me, I go for the corn-super-sweet, succulent corn
that explodes in your mouth it’s so crisp and fresh. We’ve been eating
it raw in salads, charring it over a grill to make salsa and roasting
it ever so lightly to eat right off the cob. I’ve tasted corn from at
least a half dozen farms this summer, and nothing beats Harbes.

But enough about the food. You probably come to LENNDEVOURS to read about wine, right? Well, you may not know that the Harbes family also grows wine grapes, and has released their first wines.

The labels for both their 2005 Merlot ($16) and 2005
Chardonnay ($14) describe their vineyard as a "unique stony hillside
ideal for extraordinary wines" and Kareem Massoud of Paumanok
Vineyards-where the wines are made-describes it similarly, telling me
in an email "It is nicely situated on a south-facing slope, about as a
good a slope as you can find on Long Island, which we all know is
generally flat. It is a well-maintained, young vineyard." They have
around 2.5 acres each of chardonnay and merlot.

But how are these wines-which can be picked up just
behind the main farm stand in a charming, rustic shack that could only
be improved with real glassware rather than clear plastic cups? In a
word, promising. But, young vines–which these certainly are–tend to result in less flavorful, less
interesting fruit and thus, wines.

The chardonnay, which at $14 is a relative bargain
for a barrel-fermented rendition, is a young wine and the fruit seems
to be lurking in wait with just the faintest aromas of pineapple and
roasted apples. Warming vanilla and caramel notes are joined by just a
little sweet corn (I assure you that none of that delicious corn
actually went into the wine).

On a medium-bodied, somewhat creamy palate, the oak
is a little raw for my taste and isn’t balanced by that timid fruit.
That said, barrel-fermented chardonnay is extremely popular and this is
a serviceable wine in that style. Just don’t over chill this wine-the
oak is overwhelming right out of the fridge. 392 cases were made.

I’m looking forward to their 2006 steel-fermented chard, which hasn’t been released yet.

I was much interested in their soft, fruity
merlot. Medium-bodied and just a little juicy it offer loads of black
cherry and plum fruit aromas that are accented by faint hints cocoa
powder. The palate is straightforward–with bushels of cherries and a little
chocolate–but relatively low tannins make this a nice, gulplable wine.
There are many local wines priced much higher that aren’t as good.