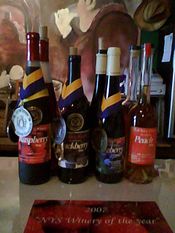 Recently, the 2007 New York Food and Wine Classic named Red Barn Winery as the "New York Winery of the Year." Surprisingly, this winery is not located in the Finger Lakes, Long Island or one of the established New York wine regions. Instead, Red Barn can be found in Liverpool, a small suburb just north of Syracuse in central New York.

Being a proud resident of Syracuse, I took it upon myself to visit Liverpool one afternoon and see for myself what Red Barn is all about. The winery is located in the far end of an old horse club barn, most of which has been converted into a gift shop. Like much of Liverpool, the immediate area was a mixture of small office buildings, a neighborhood, and a couple of stores and strip malls.

Once inside, I was pleasantly surprised to find that the interior of the winery played up the old barn theme with a great deal of success. The weathered and dark wood interior, decorated with old tack and riding equipment, lent itself to an aesthetically pleasing tasting. There was plenty of room in the back for larger tastings and parties as well.

Red Barn won Winery of the Year for the numerous medals it received in the Classic, all of which were awarded to sweet wines including a ruby port made using Concord grapes, a blueberry wine, a Concord-based red blend, a blush made from Catawba, and a raspberry wine.

The raspberry wine won the "Best Fruit Wine" category and the "Best
Specialty Wine" category. This wine, like the other fruit wines, had a
very pure and distinct fruit taste which certainly made an impression
on the palate. Despite the unadulterated nature of the fruit, the
raspberry wine was very sweet, coming in at 8% residual sugar.

The only vinifera-based wines available for tasting were
merlot and cabernet sauvignon, both of which were made using Long
Island juice. Of these two, the cabernet showed some potential. The
chardonnay and riesling, sourced from the Finger Lakes, were
unavailable.

Most of Red Barn’s wines were very sweet, and while some were
well-made with distinct and interesting tastes, I simply did not enjoy
the level of sweetness. For those who enjoy sweeter wines, I detected a
great deal of craftmanship within Red Barn’s selection, especially in
the fruit wines, and I would recommend them on that level.

Some, including myself, have questioned the Classic’s motivation in
awarding a Winery of the Year Award to a winery that sources all of its
grapes from distant growers and is located in a region without anything
approaching a wine industry. While it’s just east of the Finger Lakes,
Syracuse’s location on the narrow Ontario lake effect snow band makes
it very cold and very snowy, much more so than areas only miles away.
Liverpool itself has very little agriculture.

It’s extremely unfair, however, to condemn Red Barn for receiving
positive judgment from the Classic. While I was tasting in Red Barn,
several customers arrived who were not knowledgeable wine folk. They
were interested in tasting wine and learning about wine, and Red Barn
was eager to cater to them. As a winery in a suburb not known for
unique shops or institutions, Red Barn stands out and perhaps does a
service to expanding the love of wine to those who might not otherwise
make an effort to experience it firsthand.

Plus, the fruit wines really were well-made.

So, instead of being too harsh toward Red Barn, I’d prefer to focus on the competition it won.

What is the motivation of the Classic?

It appears to me that the Classic does not necessarily speak to the
New York wine industry as a whole. The archaic and formulaic nature of
the competition allows for categorical results that highlight good
wineries but not necessarily the absolute best. It is not even clear
how many of the "top" wineries compete in the Classic, further proving
the point that the competition is not as indicative of the New York
wine industry as it claims.

Is the Classic at the cutting edge of the new trends and new
successes within the New York wine scene? Based on the analysis and
conversation we’ve all been having on LENNDEVOURS, it doesn’t seem like
it to me.

There is plenty of room within New York State for a winery like Red
Barn. I am interested to see how the owner and winemaker at Red Barn
expands upon his recent success. I feel adamant, however, that somewhat
arbitrary "Winery of the Year" awards do places like Red Barn no more
of a service than wine lovers out there who want to use the Classic as
some sort of a basis of comparison.

Red Barn is in good hands for what it is trying to accomplish. I wish I could say the same about the Classic.