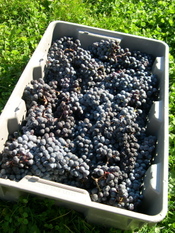 I first wrote about Sannino’s Bella Vita Vineyard in late July, but I’ve got some news that I know at least a few of you will be interested in.

Put simply, Sannino gives you the opportunity to make your own barrel of wine, either alone or with friends. They bill themselves as a home winemaker center, which is a pretty cool idea.

They grow merlot, cabernet sauvignon and cabernet franc and normally for $3500, you get a barrel of wine (23 cases of wine), bottles, corks, labels, three educational sessions and a harvest festival. Their first, biggest harvest festival is this weekend, but they are going to have a smaller one later in harvest.

That’s not the cool part though.

They’ve let me know that LENNDEVOURS readers can get a 20% discount off this price for the 2007 vintage.

This includes all of the above things, and the harvest fest* in late October.

Now, I don’t expect many (any?) of you to want a full, half or even third, but if you’re interested on any level, let me know and I’ll see if we have enough people to do something here (to make it more affordable). I’m already planning to make some wine with them, but that doesn’t mean I won’t do more. Shhh, don’t tell Nena.

One thing to remember, however, that this is a very hands on process. Someone involved in every barrel needs to be present for at least 4 sessions: harvest/crush, press (two weeks later), racking in January, and bottling in 2008.

* Depending on how many people we include, we may need to pay a $15 fee for the party to help cover food and wine costs