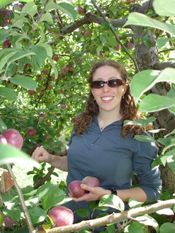 "How old is that apple tree?" I asked Uncle Sam, pointing at the gnarled, sprawling specimen that towered over his small orchard. "Well, it’s been there a long time. My father probably planted it before I was born," replied the 82-year-old.

I was helping Uncle Sam pick apples at his farm, aided by one of my wife’s older cousins and his three-year-old son. I climbed up the trees to reach the highest branches upon which no ladder could lean and shook vigorously, dropping the ripe gems to the ground. The little guy giggled and ran about, picking up as many of the pie-bound Northern Spy apples as he could.

These Northern Spy apples, coming from very old trees, were really tasty. Most public orchards don’t provide an opportunity to pick apples from such an old tree.

New York State is home to a wide variety of apples and apple-growing regions, ranging from Long Island to Lake Erie. The Finger Lakes region is no exception. Orchards of all shapes and sizes can be found in many locations between and around the lakes. The valleys west of Syracuse are home to a great deal of apple orchards, and on the plains north of the Finger Lakes, just south of Lake Ontario, can be found some of the largest commercial orchards in the state.

In addition to the picking done at the family farm, my wife Kathleen and I recently went to one of the Syracuse area’s best public orchards, Beak & Skiff. This orchard is a Central New York institution and a fun fall trip for families. After we picked some fruit (Kathleen is pictured at right) we went into the orchard store where I was happy to discover that Beak & Skiff had recently renovated its apple winery tasting room down the road.

Of course, I immediately headed downhill to see what was going on. 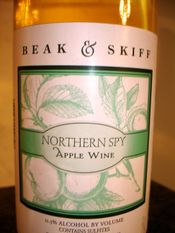 I am not a huge fan of fruit wines since most tend to be a little too sweet. Beak & Skiff’s wine and cider selection, however, impressed me. The wines are made from different apple varieties and range from reasonably dry to sufficiently sweet. The ciders are crafted in a traditional manner with relatively low alcohol and a crisp, acidic taste.

Apple wine will never exhibit the complexity of grape wine, but apples are a far more accessible fruit to which we can all relate.  Most of us (with some notable exceptions) never get a chance to handle wine-bound grapes in the vineyard.  Apples are different. We eat them constantly, and nearly all of us can find a local orchard in which to experience the fall harvest.

Getting out there and picking the bounty of the land is always an invigorating experience. Apples are fun to pick, go great in pies, and, thanks to places like Beak & Skiff, even better to drink. I recommend giving their wine or cider a try.

I was told by the staff that Beak & Skiff will soon be offering vodka made from apples. I imagine I’ll be duty-bound to return next year and see what apple vodka is all about.