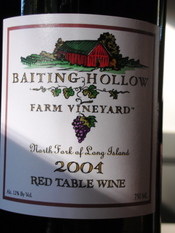 On Sunday, Nena and I took Jackson pumpkin picking for the first time. Yes, I know. The same guy who complains about the road-clogging, pumpkin-picking families every year joined the fray with his own kid. So sue me. You do crazy things for your kids. Even if they can’t walk yet and can’t actually pick anything.

But we definitely did it our own way, first meeting up with some good friends at Roanoke Vineyards for a glass of wine beforehand. Our kids (both under a year old) played as we enjoyed the early afternoon and some wine.

Next, we headed over to Rottkamp’s Fox Hollow Farm to meet up with two other couples (and their kids) to pick pumpkins. You guys don’t really want to read about the pumpkin picking though, do you? I didn’t think so. There’s nothing much to report anyway.

So what were Nean and I to do after picking pumpkins with three other couples and a total of four children, ages nine months to three years? A nap would have been more than welcome, but as we drove west, we decided to stop in at Baiting Hollow Farm Vineyard and their recently opened tasting room.

The parking lot was packed — tis the season after all — and live music greeted us from a gazebo on the back lawn. Children milled about, in their Jets and Giants jerseys (Nena wouldn’t let me put Jackson’s Steelers one on him) as their parents sipped wine and relaxed out on an expansive back porch.

Not wanting to fight upstream with our stroller, we walked around to the front and went in the main entrance and were impressed with the space. I’ve driven past the building for months while it was being renovated and the time — and no doubt money — that went into the work in clearly on display. The entire building is beautiful, lots of dark wood, a copper-top bar. In some ways, it reminded me of some wineries we’ve visited in Sonoma. It certainly stands out on bucolic Route 48.

After weaving our way around some poorly placed tables and another crowd inside, we asked to do a couple tasting flights, but we didn’t get them. You see, BHFV doesn’t actually offer flights. it’s a per-taste set-up that seemed to make more work than necessary for both customers and pourers alike.

It’s just one man’s opinion, but flights would definitely streamline things and make the experience better for everyone.

That said, even up against an onslaught of anxious tasters, the staff did their jobs pretty well. They were a little overwhelmed, but it barely showed. Best of all, the wines were served at the proper temperatures — the whites weren’t ice cold, which they often are — and our glasses were replaced for every taste. A new glass for every wine may be overkill, but it’s hard to complain about that.

And once Kim, our pourer, noticed that we were spitting — rather than swallowing our tastes — and knew a bit about wine, she started to open up and share more information about the wines too. Most in the room clearly didn’t care much about growing years or how the wines were made, but, it’s that time of year.

The wines, as one might expect at a winery making its debut, were a bit up and down, but there were wines worth going back for.

The two white wines on the list were a bit underwhelming. The Baiting Hollow Farm Vineyard 2005 Chardonnay ($17), fermented and aged entirely in stainless steel offered fresh, clean and citrusy flavors with hints of crisp apple, but would be a much better value at $12 or $13. The 2005 Riesling ($17) made in an off-dry style, was similarly serviceable, with ripe peach and melon flavors, but there wasn’t quite enough acidity to balance the residual sugar.

If you like off-dry rose, you will probably like their 2005 Rose ($16), which overflows with ripe wild strawberries both on the nose and on the palate — and has delicious, refreshing acidity. It’s just a little sweeter than I prefer.

By far the best value in the portfolio, Baiting Hollow Farm Vineyards 2004 Red Table Wine ($13) is a blend of 70% Cabernet Franc, 25% Merlot and 5% Cabernet Sauvignon that is fairly light bodied with red berry and spice flavors. It’s a nice everyday wine that — true to its name — is probably best at the table with food.

Of the two merlots on offer (both $19), the 2003 is cherry-dominated and a little smoky, but light and a little watery on flavor. Instead, try the 2004 which offers blackberry and black cherry flavors accented by a little vanilla and oak. It’s a nice red that hints at the potential of future vintages.

The best wine, by far, however is Baiting Hollow Farm Vineyard’s 2004 Cabernet Franc ($20) offers terrific blackberry, spice and earth flavors. Medium bodied, the tannins are smooth and the finish lingers. I can’t recommend the cabernet sauvignon, which was underripe and green tasting.