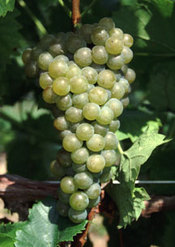 I read an interesting little piece this morning from the Cornell Daily Sun that talks about hybrid grape varieties, their advantages and what some wineries in the Finger Lakes are doing with them.

Apparently, in addition to being more resistant to the cold weather of the region, they are also less susceptible to the typical grape maladies, meaning that fewer pesticides are needed to grow them. It’s kind of an interesting way to "go green" no?

I know that there are plenty of wine lovers out there who turn their noses up at hybrids, but I’ve found several seyval blancs that were tasty, if simple, and vidal (or vidal blanc depending on who you talk to) leads to some delicious table and dessert wines.

Dave Peterson, general manager at Swedish Hill Vineyard, is quoted in the story as saying that Traminette, another hybrid, is "virtually indistinguishable from the European grape that was one of its parent varieties."

I’ve had at least 5 or 6 different Traminettes, all from the Finger Lakes, and while it’s certainly easy to identify Gewürztraminer as a relative, to call them indistinguishable is ridiculous. The ones that I’ve had have been very one dimensional. I guess if we’re comparing them to cheap, uninteresting Gewürztraminer, they might be very similar, but not if we’re talking about top-flight gewurz.

What kind of experiences have you had with these and other hybrids?