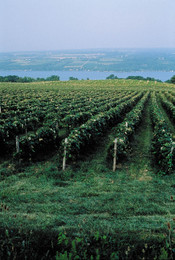 "The intense flavors just burst in your mouth," explains Phil Davis of Damiani Wine Cellars, describing the qualities of the red vinifera grapes he harvested and tasted in the fall of 2007. "The juice is dark and complex and shows a lot of potential."

Davis is one of many Finger Lakes winemakers who are extolling the virtues of the 2007 harvest, which they claim may lead to one of the best Finger Lakes vintages in many years. The weather certainly was unique. A dry spring led to a very dry summer; the growing season extended far into September and even into October with several 80 degree days arriving after Columbus Day.

"The weather speaks for itself," Steve Shaw of Shaw Vineyard states succinctly. "This harvest exceeds 2005 and is probably better than 1981 for the development of varietal character."

Many Finger Lakes wineries struggle to register more than 19 or 20 Brix in their red varieties any given year. This year, Shaw was able to record 23 Brix for his merlot crop, 24.2 for cabernet franc, and 24.7 for cabernet sauvignon. "I would have waited and gotten even higher Brix," Shaw jokes, "but the migrating birds saw the potential and were eating my grapes like crazy."

Despite the obvious benefits the hot, dry weather added to the red crop, white grapes — including the esteeemed riesling variety — may not fair as well or as evenly. While the Finger Lakes terrior often adds a nice acidic backbone to its rieslings, the hot weather sapped many clusters of their acidic character. For some wineries, acid will have to be added to the riesling batches post harvest to help balance the flavors of the grapes.

Both Davis and Shaw are life-long grape growers who have turned to winemaking only in recent years. They point to low yields as the secret to surviving problems with drought, low acidity and even sour rot. "I kept my yields as low as possible," says Davis. "Those who tried to exceed four tons an acre probably had more problems."

Another winemaker who did not want to be identified was even more direct: "This vintage will vary in quality depending on the skills of the winemaker and vineyard manager and how they evaluated the yields and other conditions on their site. Some rieslings will be excellent, while others will be a disaster. It’s that type of year."

Ironically, 2007 may be a great year for red varieties, for which the Finger Lakes are not well known, and an uneven year for riesling and other whites, for which the Finger Lakes are highly recognized. Only time will tell, but as the wines begin to develop in barrel and in tank a consensus may soon develop over the 2007 vintage and what its hot, dry weather has wrought.

If critics and consumers respond favorably to Finger Lakes reds and find uneveness in the whites, it will be a strange vintage indeed.