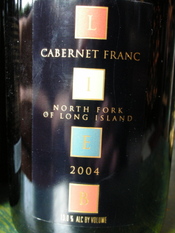 Every time I taste a wine like this one, I wonder if Long Island wineries aren’t crazy to push merlot as the be-all-end-all red in the region. Crazy might be overstating it a bit, but I wonder if cabernet franc would get more publicity in these parts if it were a better known variety amongst the wine-drinking population.

You all know of my undying devotion to the grape probably best known as the key red France’s Loire Valley. But I’m not alone. Not by a long shot.

General Manager Gary Madden, the sometimes-reluctant face of Lieb Family Cellars, loves the stuff too. They released their first varietal cabernet franc some time ago, a 2003, and it disappointed. It was disjointed on release and, at least the last time I tasted it, hadn’t come together much later in its life.

But, the 2004 is much much better. In fact, it captures the grapes potential on the North Fork quite well.

At Lieb anyway, I think cab franc rules the red roost. The 2003 merlot, while tasty, pales in comparison. Go for the franc.