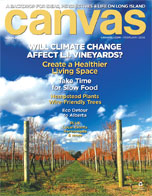 As many of you know, I run the website for canvas Magazine, a Huntington, N.Y.-based magazine that focuses on sustainable, "green" life on Long Island an beyond. One of my best friends, Matt O’Grady is one of the publishers, so I’ve been helping them out for a little over a year now.

But this February issue, which just hit the streets, is one that I’m particularly proud of because the new editor, Diana Murphy, and have been working great together and this issue shows it.

If you look at the cover of the magazine this month, you might recognize that shot. Why? Well, it was taken by none other than LENNDEVOURS’ photographer Ellen Watson. In fact, it’s one of the shots she’s taken for our Vineyard Visuals series.

But it doesn’t stop there. Look inside and you’ll see a story by LENNDEVOURS contributor Richard Olsen-Harbich on climate change and its impacts on the wine world. Some if it may look familiar to you, because it’s an expanded, re-worked version of a post he did here on LENNDEVOURS.

And last, but certainly not least, I’ve started to do a little writing for canvas again with the debut of L.I. Tastemakers, a series of short profiles I’ll be doing. This month’s piece is on chef Doug Gulija.