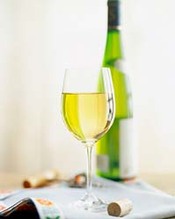 As Lenn wrote last week, Wine Spectator just released scores for a list of 2006 Finger Lakes rieslings as tasted by James Molesworth. Many thanks to our friend over at Finger Lakes Weekend Wino, who has summarized these results in two posts here and here.

The wines on the list represent some great wineries to be sure, and while I respectfully disagree with some of the relative comparisons between these tastings (the 2006 Ravines is, in my opinion, one of the best Finger Lakes wines I’ve ever tasted and deserves a higher score) it is encouraging to see that these wines are showing a great deal of consistency across the board.

2006 was a great vintage for rieslings, and many different producers are creating competitive wines that are true ambassadors for the region as a whole.

Despite this success, I continue to be discouraged by the gentleman’s B+ that Wine Spectator always seems to designate for the top crop of Finger Lakes wines. I am not implying that Finger Lakes rieslings deserve scores well into the 90s or even approaching the magical classic status of 95+, but it has been apparent to me over the last few years that no matter the quality of the group of rieslings tasted by Wine Spectator, the very best always hit a celing at 88-89.

Richard, a LENNDEVOURS reader and publisher of his own blog Passionate Foodie, was kind enough to supply me with the text of a James Molesworth subscription blog post that explains the taster’s feelings about New York wine:

"As for New York State, the situation is better, thankfully,
but not by leaps and bounds. I’ve reviewed over 600 New York wines and
found just five that merited an outstanding score, and three of those
were the ’01, ’02 and ’04 vintages of Standing Stone’s Vidal
Blanc Ice Wine. (Note: My colleague Thomas Matthews tastes the wines
from Long Island; I taste the wines from the rest of the state.) Only
27 percent of the 600-plus wines I’ve reviewed failed to break 80
points, a far better showing that the "Other U.S." category, but still
a high number.

Within New York state, the Finger Lakes
has quality Riesling in the palm of its hand, but seems intent on
tinkering with a hodgepodge of varieties, including reds from Cabernet
Sauvignon and Pinot Noir that rarely achieve good ripeness and varietal
character in upstate New York. That lack of focus keeps holding the
region back.

There is a bias in Molesworth’s perspective that is not totally without merit, but I feel that this bias holds back the Wine Spectator scores of deserving Finger Lakes wines. The fashion in which Wine Spectator
promotes a 90 score as a noteworthy triumph, versus a score only a few
point lower, means that a given 90 for any one wine signifies potential
for the others from the same region. Molesworth, by his own admission,
is still hesitant to give the Finger Lakes the proverbial thumbs up.

Yes, three ice wines were given solid scores overy the years, but
ice wine is a specialty wine product that can only be produced in cool
regions. As for the one 90 given to a 2002 Dr. Frank’s riesling I think
that the wine probably deserved such distinction, but one 90 in a
decade is hardly a triumph. Further in his blog, which I think was
written before the release of the 2006 scores, Molesworth comments on
having dozens of bottles of Finger Lakes wines in his queue that he has
never heard of, so I suspect in 2002 that the Dr. Frank’s stood out
from only a few available wines.

Molesworth obviously wants the Finger Lakes to be more consistent in
its offerings, focusing primarily on riesling, and far easier to
identify in terms of quality. He is completely right that producers
continue to experiment and some push some varietals that may not find
long-term success. Should this judgment affect the score of a single
bottle of wine? I am sure other professional tasters have similar
misgiving about the Finger Lakes as a region, but most wine
publications seem willing to concede that certain Finger Lakes
rieslings should be recognized for their quality nonetheless. Robert
Parker, for instance, gave some nice 90+ scores and flattering
descriptions to some 2005 Finger Lakes rieslings.

The cluster of rieslings from Wine Spectator’s list that huddle in
the 86+ range is certainly noteworthy, yet it is interesting that not
one of these wines stood out to Molesworth to such an extent that he
could have coronated it with a 90 and marked it as a regional
stand-out.

He really liked the Anthony Road dry and semi-dry rieslings
in comparison to all the others. These are great wines, to be sure, so
why not remove all doubt and offer a strong numerical opinion? From my
own sampling of those two rieslngs, I do not think a score of 90 would
be a stretch.

I am happy that Wine Specator seems to like Finger Lakes rieslings,
however, and maybe after more years of vintages like these they will
feel comfortable letting their guard down and start spreading the good
news.  Molesworth and Wine Spectator are not wrong to expect more from
the Finger Lakes as a region, but they should be more willing to
concede that much of the riesling being produced there should be judged
on its own merit.