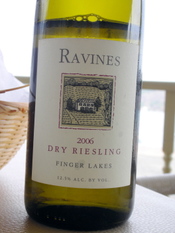 As you probably know, this week we spent four beautifully relaxing
days at a lakefront cottage just south of Penn Yan, New York — smack dab in the
middle of the Finger Lakes wine region. It’s the off season up here, so Keuka
Lake is quiet, almost eerily so when compared with the chaos that is
often Long Island, but the riesling is providing plenty of excitement for us

Much like merlot dominates Long Island, Riesling
rules the wine landscape up here. And, during our first afternoon
tasting along the east side of the lake, I found what is my Riesling of
the moment: Ravines Wine Cellars 2006 Riesling ($17).

No, it probably isn’t be the best Riesling in the
world, but it might just be the best in the region. And, in this
moment (when I wrote this) — sitting out on the dock, my toes near numb as they dangle in
the frigid water, sipping a lightly chilled glass as I type away on my
laptop — there isn’t another Riesling I’d rather have in my glass.

Deliciously minerally, with lime, orange blossom and
crisp apple notes it’s the dryness (many Finger Lakes Rieslings are
made in an off-dry style) and a focused electric jolt of acidity that
bring structure and lift this wine to new heights. Medium bodied and
lingers on the finish, inviting another sip or bite of your meal. This
is Finger Lakes Riesling at its most elegant and food friendly. Best of
all, it’s a great value.

Winemaker Morten Hallgren is doing exciting things with other grapes as well.

Morten, raised in Provence on his family’s
vineyard, has a diverse winemaking background that took him from France
to Texas, to North Carolina, and finally to the Finger Lakes, where he
is best known for his six years as head winemaker at Dr. Konstantin
Frank Vinifera Wine Cellars. 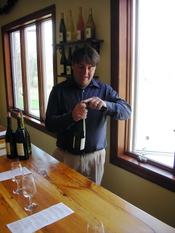 In 2000, Morten and his wife Lisa bought 17 acres of
land on a glacier-carved hillside on the eastern slopes of Keuka Lake.
This land is located at the widest part of the lake, which allows
grapevines to receive maximum benefit from its temperature-moderating
effects. It has well-drained soils and is situated between two deep
ravines, which drain cold air from the land during the winter. These
ravines are the namesake of the winery. When I visited, they had just
plowed 6 acres behind the tasting room for planting later this spring
with Riesling, chardonnay, pinot noir, cabernet sauvignon and petit
manseng.

When I was there, I got to taste some of Morten’s
first vintages at Ravines-a Riesling, a chardonnay, a pinot noir and a
cabernet franc. All impressed, particularly the pinot noir, which is
really just coming into its own.

Of the current releases, the 2007 Sauvignon Blanc
($18) stood out-even if it was only bottled two days ago. And, for
anyone who thinks that great wine can only be made with the classic
grapes of Europe, think again. Ravines Wine Cellars 2006 Keuka Village White ($12),
a blend of 80% Cayuga White and 20% Vignoles, was an affordable
surprise that reminds me of the everyday blended wines from Alsace. The
nose is fruity and fresh with loads of melon and peach with just a
little floral character and minerality. Medium-to-light bodied, those
same fruits dominate the palate with slightly tropical hints as well.
There is a light sweetness to the wine, but more than enough acidity to
bring balance.

I’ve said many less-than-nice things about Finger Lakes reds in the past, but Morten’s 2005 Meritage ($25) deserves mention as well. I liked it enough to make it the only Bordeaux-style red that I bought the whole trip.

There are Finger Lakes wineries that are bigger and better known, but Ravines Wine Cellars is clearly one of the most exciting, with a great future ahead.