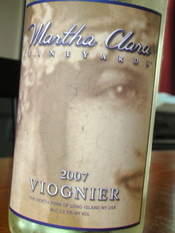 Today is Wine Blogging Wednesday, hosted by Dr. Debs of Good Wine Under $20, a blog that has received quite a bit of acclaim over the past year or so. The theme she chose proved to be a bit of a challenge for the guy who tries to drink as much local wine as he can — particularly for WBW. You see, she wanted participants to drink a wine made from the white varieties of the Rhone Valley in France… things like Marsanne, Roussane and Viognier.

New York is a bit cool, generally, for those grapes, but one North Fork Producer does make a viognier, that being Martha Clara Vineyards.

So, I was able to drink local this time around, and enjoy one of the first releases from MCV’s new winemaker Juan Eduardo Micieli-Martinez, formerly of Pellegrini Vineyards and Shinn Estate.

The nose is expressive, but not overly so, showing nice peach aromas with honeysuckle and some just-barely-ripe honeydew melon as well. The palate, which is medium bodied and features a bit more acid than most Viognier I’ve tasted, offers straight forward peach/nectarine flavors with a lemon zest note on the end of a medium-long finish. It doesn’t have much of the oily, glycerin mouthfeel I’ve found in many of the Viogniers I’ve tasted, but with so much acidity in its youth, one wonders if it will reveal itself with another year or two in bottle.

Overall, there is a focus and a cleanliness to this wine that hasn’t been present in previous vintages of this wine. That gives me hope for the future of the winery under Juan’s watch.