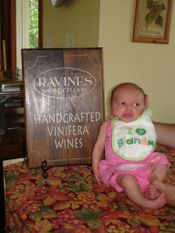 Being a father is wonderful, but the interrupted nights and the chaos of getting baby from point A to point B made extraneous activities — like drinking and writing about wine — nearly impossible at first.

But, now that six weeks have passed and the Feulner family is in a bit of a groove, albeit a shallow and bumpy one, I’m ready to try and scratch my way toward some new posts on LENNDEVOURS. I’m attending a press event for the weekend’s Finger Lakes Wine Festival at Watkins Glen tomorrow evening, so hopefully I’ll be able to follow up with a report soon thereafter.

In the meantime, enjoy a photo of young Elizabeth at her first winery.  I was visiting my parents in Corning last weekend when I received and email from Ravines Wine Cellars on Keuka telling me that they were serving food in their tasting room inspired by Provence cooking.

Hey, I love food!  Lisa Hallgren, winemaker Morten Hallgren’s wife, is a tremendous chef and her food paired well with the new release of Ravine’s 2007 Pinot Rosé, a flavorful rosé with a touch of strawberry and playful minerality. I would definitely recommend this rosé as a solid summer wine. It is a fine demonstration of what can be done with rosé in the Finger Lakes.

I would have taken some notes on the food, but as you can see by her grimace in the photo Elizabeth took little time to make it known that she was hungry, her cries forcing my wife and much of my family to retreat to the front porch for a feeding.  During Elizabeth’s lunch, Morten was kind enough to show me the brand new vines he’s planted on Ravines property which should be producing grapes in 3 years or so.

We ended the Finger Lakes trip with a lunch at Snug Harbor near Hammondsport. The lunch menu was simple but delicious, but even more importantly little Elizabeth slept through the entire meal and allowed us to take in the breathtaking views of the long blue water surrounded by the glaciated hills.