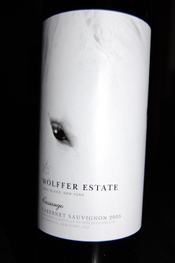 Wolffer Estate Vineyard, one of Long
Island’s most recognizable and accomplished wineries
is celebrating
its 20th anniversary with six limited-release wines that "push the
boundaries of Long Island winemaking."

Roman Roth, hired by Christian Wolffer in 1992, is
known as one of the region’s premier winemakers and these new wines
both exemplify and no doubt challenged his winemaking acumen. Each is named for a
horse from the Wolffer Stables, a 100-acre, 80-stall facility that apparently has the
largest indoor riding field on the East Coast.

I got to taste four of the six wines last weekend, and today we’ll start with the Wolffer Estate Vineyards’
2005 Cassango Cabernet Sauvignon ($40).

Cabernet sauvignon can be a risky proposition on the East End. In
anything but the best vineyard sites, it can be difficult to ripen and
often results in thin, green-tasting wines.

But this wine, a blend of 86% Cabernet
Sauvignon, 9% Merlot, 5% Cabernet Franc, is proof that in hot years
like 2005, Long Island cabernet sauvignons can be both intensely
flavorful and elegantly age-worthy.

A rich, deep purple in the glass, the nose is just as dark and intense, with aromas of
crushed blackberries, black cherries and figs backed by toasty vanilla,
minty-basil and faint smoke notes. Medium bodied and ripe across the
board–fruit and tannins–the flavors closely match the aromas with a long, earthy
finish that hints at gravelly, mineral character.

Drinking well now after decanting,
this one will improve for years–even a decade or more. Only 157 cases were made.

By the way,
Cassango is a 17-year old Hanoverian Warmblood that lives at the stables.