Last week, members of the world’s wine industry descended upon Stony Brook Southampton for “The Art of Balance, Cool Climate/Maritime Wines in a Global Context,” a symposium organized by the Stony Brook Center for Food, Wine and Culture, and the Long Island Wine Council.

Over two days of presentations and panel discussions, many topics were covered, including the various winemaking techniques employed by the winemakers, global climate change and its impact on those winemaking decisions, “natural” winemaking and the elusive concept of terroir—a French term loosely defined as a wine’s sense of place.

Far too much ground was covered to fit it into a single blog post, so today we’ll cover some generalities and some overall impressions. Then, we’ll target some of the most interesting statements and topics in future posts.

I think what made the biggest impression on me was that there are a lot of cool-climate winemakers doing a lot of different things in the pursuit of a common goal — perfection. The passion oozed from these men and woman. It was inspiring. It really was.

There were, of course, a couple uncomfortable moments, even controversial ones.

When asked what they thought of Long Island’s wines, the first day’s panel offered mixed reviews. Thomas Laszlo, VP of winemaking operations at Heron Hill Winery in the Finger Lakes, wasn’t impressed by Long Island chardonnays, calling them “thick” and saying that they show a “similarity across the board."

I have no idea how many different chardonnays he actually got to taste in his short time visiting the area, but I have mixed feelings on the matter. On one hand, I think that there are many different styles of chardonnay being made here with various amounts of oak and malolactic fermentation. I don’t think, however, that these are the white wines that Long Island does best. They aren’t the wines that will put or keep the region on the map either.

Laszlo found blends from Bedell Cellars and Channing Daughters Winery much more to his liking. Oddly, he didn’t mention sauvignon Blanc, the grape where many others think Long Island’s white wine future resides. I’m one of those ‘others’ by the way.

On day two, Clifton was much more complimentary, telling those assembled that he thinks that “the wines are as world class as from any region I’ve been in” adding that "New York should be getting 90s" referring to elusive and undeniably important wine ratings.

Clifton finished by saying "I feel like I’m in Santa Barbara 10 years ago." Of course North Fork winemakers don’t have the advantage of a blockbuster wine movie to help justify and substantiate the work they are doing. 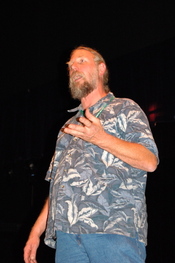 One of the most entertaining presentations was given by the Lenz
Winery’s own Eric Fry, who can always be counted on for strong opinions
and a bit of humor.

He started with a brief history of Long Island
wine, also describing the unique combination of water and weather that
allows for slow, even ripening and the retention of natural acidity.

And while he characterized terroir as a “marketing term” he did
describe what he sees as an emerging style on Long Island: respect for
the vineyard, ripe fruit and tannins, and fruit-forward wines that are
not too high in alcohol or too low in acid. Shortening that definition, he
described the style as “full-flavored, balanced wines.”

Look for more information and thoughts soon. Like I said, there is a lot of ground to cover.