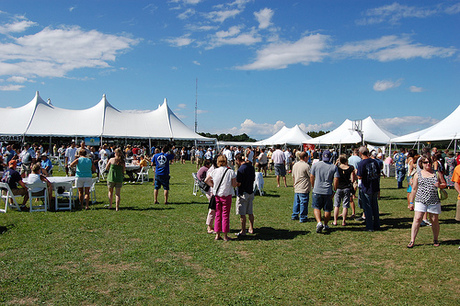 I drink a fair amount of wine, which will come as no surprise to any of you. If I didn’t drink wine, I guess I wouldn’t have a wine blog now would I?

But what might surprise you is that I probably drink just as much beer. Yes, really.

There may have been a time in America when beer and wine drinking was an either-or situation. You drank wine OR you drank beer, not both. But I don’t think that’s the case anymore. Beer is slowly, and thankfully, starting to get its due among those who care about what they are putting in their mouths.

Of course I’m not talking about American mega-brews. Those light-yellow, high-carbonation, near-flavorless beers might be acceptable at a football game on a frigid when one is merely looking to warm him or herself any way possible, but not with dinner or on a hot summer day.

Why am I bringing this up? Who cares?

Secondly, if your experience with beer has been limited to those mass-produced, character-less beers we all see on television commercials, you need to make sure that you attend next year’s North Fork Craft Beer Festival. I went to the latest one a couple weeks ago at Martha Clara Vineyards and was able to taste a great many honest-to-goodness, how-its-supposed-to-be beers in one place.

I’ll make sure that I give you plenty of notice on next year’s. I’m planning to go again for sure.