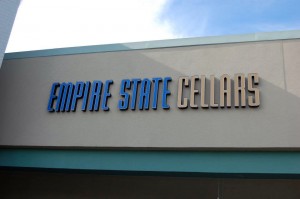 It is unusual for a single wine store to become such a focus for an entire state. More unusual still when the store is not located in New York City. Since returning home from the Wines of the Year weekend on Long Island, no fewer than three wine industry professionals from the Finger Lakes have asked me, “Did you go to Empire State Cellars?” Or, “What was it like?” Or, “Was it as cool a place as I’m hoping it is?” They are intrigued by the idea of the only wine store in the state that offers exclusively New York products.

That’s because there is doubt about whether the locavore movement ought to include wine. Empire State Cellars is not at the heart of the locavore movement, but it will serve as a crucial kind of test: Will consumers gravitate toward New York wines, and will they keep coming back? Lenn has written extensively about the local movement in restaurants. Wine Spectator’s James Molesworth wrote about the disconnect between local food and local wine last summer, concluding, “It’s time for sommeliers and retailers to show some support for the efforts of these growers.”

Success at Empire State Cellars has the potential to reach far beyond its store walls. Restaurants will notice. Other stores might be moved to increase their focus on New York wine. Success begets success.

It’s early, but there are good signs. Jim Silver, who has brought the store from vision to brick-and-mortar reality, has invited winemakers from across the state to pour their wines and engage customers at weeknight and weekend events. Some events are inevitably sparsely attended, but that’s to be expected for a new venture. 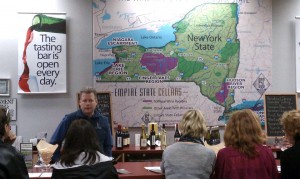 However, some events are exceeding expectations by any measure. Recently, Arrowhead Spring Vineyards from Niagara held what owner Duncan Ross calls “one of our best events ever, anywhere” at ESC. Consider that: A small winery from the far corner of New York state goes to the opposite end of the state, eight-plus hours by car, and blows the doors off. Duncan and his wife Robin were thrilled with the turnout — and the quality of the interaction.

“The customers were fantastic,” Duncan tells me. “We had a record crowd for our tasting, which made us feel so welcome. And it certainly made the long drive worthwhile. We had lots of great questions and interaction during the tasting.”

The event offered Duncan and Robin a chance to see the store up close after hearing the hype. They were not disappointed.

“Just to be surrounded by so much great New York product was inspiring,” Duncan says. “The layout of the store was superb, with educational materials and a wonderful tasting bar. The staff is obviously passionate about New York wines. It was a lot of fun talking with them.”

That last point is key. Silver has worked hard to ensure a knowledgeable staff well versed in wines from all New York wine regions. On my visit, I was equally impressed. One employee smiled and told me, “One customer walked around for ten minutes before finally asking, ‘Where are the Chilean wines?’ But they’re open to our suggestions, and we’ve already seen repeat business.”

Peter Bell, winemaker at Fox Run Vineyards in the Finger Lakes, also made the trek to Riverhead on a recent weekend. “I loved the place,” he says. “There is a great vibe there. They’re obviously dedicated to the love of wine without being stodgy.” More winemakers are preparing to visit this month: Red Newt Cellars will be pouring tomorrow, Atwater Estate Vineyards on Saturday, Dr. Frank on the March 17, and Peconic Bay on the 22. (Silver is the General Manager at Peconic Bay.) 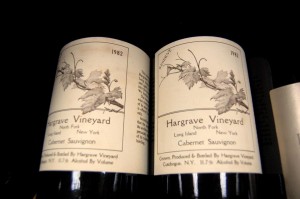 From a purely aesthetic standpoint, the store is remarkable. It’s among the nicest wine stores I’ve ever visited. Even more exciting is the fact that ESC offers hard-to-find wines; you can buy Hargrave Vineyard wines from the 1980s or you can pick up the sold-out Bloomer Creek Rieslings from the 2009 vintage. The options are almost overwhelming. This store is not about boosting New York; it’s about promoting quality wines, period.

But Silver has to be a pragmatist. He won’t offer Kendall Jackson Chardonnay, but he offers Red Cat, and it has already become a top seller. Perhaps Red Cat will be a bridge to finer New York wines, but at the very least, it will be a bill payer.

Ultimately, Empire State Cellars will only succeed if the local clientele embraces the concept while the rest of the state continues to support the effort. There are no sure things in business. The industry is wise to support this store. After all, many people have wondered if such a store were possible. In Riverhead, we’re finding out.