A small cluster of vines dating to 1866 is, one would assume, the proudly held evidence of some European estate’s history. Given the relatively short history of winemaking in the Finger Lakes, such a cluster of vines might seem out of place on Seneca Lake.

That is exactly why Chris Missick loves this little piece of local folklore. Because the vines are real, and so are his family’s dreams of building something new and exciting around them. 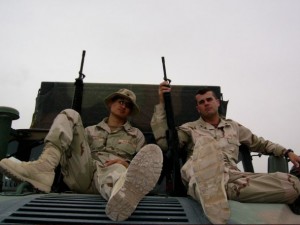 Chris Missick looks like he was cut out of a piece of granite, and the photo of him holding a rifle while sitting on the back of a U.S. Army truck (he’s on the right) is particularly gripping. He’s a former-soldier-turned-California attorney, who is now moving with his family to the Finger Lakes, chasing down an unlikely dream. After all, Chris married a woman from France; if he were going to get into the wine business, one would expect to find him on a French estate.

Instead, he is scouring the records, trying to find out exactly who planted those 1866 vines, and how they survived for so long outside the construction site at Villa Bellangelo. Best he can tell, they are the oldest living vines in the region, and perhaps some of the oldest in the country.

“Those vines even predate Concord grapes,” Chris told me as we discussed his family’s purchase and expansion of the winery. “It’s a reminder that this region has such a long and fascinating history. That means a lot to my family.”

His family has local ties. His mother, Betty, grew up in the Rochester area, and the Missick family has moved back and forth from western New York to the southern California area. Chris’ father Greg has a history in the construction business, which will help as they build a new, modern tasting room and a state-of-the-art crush pad.

But why wine? No one in the Missick family, including Chris’ brother Matt, has experience in the industry. But after Chris’ wedding in 2009, he and his family took a wine tour and finished with a stop at Villa Bellangelo. They began to wonder: What it would take to move the family to the Finger Lakes and get involved? For Sale signs had popped up in several locations, including Bellangelo.

The family purchase was completed this past fall, and already the Missicks have ambitious plans. For one, they’ve hired Ian Barry to be the full-time winemaker. Barry, a stalwart in the industry, had been making the wines at the highly regarded Keuka Lake Vineyards. He was hesitant to leave KLV (and he’ll continue as a consultant), but this was the chance he had long imagined.

“It’s an existing winery, but in a lot of ways, it’s like building a winery from the ground up,” he told me. “They’ve given me a lot of room to make decisions about which varieties to pursue, what direction to take the wine program.”

Here’s what consumers can expect from the new Villa Bellangelo.

The previous owners made a series of entry-level wines known as the Scooter Series. Those will continue, but Barry said they’ll pare down the list of grapes used to make them. Chris Missick explained that the old 1866 vines are a reminder that this region has long embraced native (and eventually hybrid) grapes.

“When you’re driving around the Finger Lakes in the fall, it’s the native and hybrid grapes that you can smell in the air,” Chris said.

Barry is keeping several of Villa Bellangelo’s most popular wines, most notably its mildly sparkling sweet valvin muscat, known as a moscato. “Our customers really enjoy that wine, and the only change will be a sparkling moscato that’s a little less sweet,” Barry said.

The Italian-heavy theme will be gone with some of the wines’ names, but Barry said that a port-style wine will also stay.

A new label with a new name will emerge, perhaps as soon as 2012 but likely with the first release of the 2012 vintage. Barry expects riesling to have a heavy focus, but that won’t be all.

“We’ll have a heavy focus on aromatic whites, but we won’t limit ourselves,” Missick said. “Ian has made some wonderful red wines, and we’ll put an emphasis on working with growers who will help us do that, particularly if the year is right.”

The Missick family is considering naming the new line of wines 1866 Wine Cellars, but that will have be finalized with the TTB. “You’re the first person to hear that name,” Chris told me with a laugh. “We love tying the history of the property to the name, but we’ll have to do some work before that’s all settled.”

The red-and-white tablecloths are gone from Villa Bellangelo. The kitschy Italian theme is largely gone, too. “We appreciate what the previous owners did,” Chris said. “We respect them. We simply have a new approach, and we’re excited about that.”

Another quality shines through when talking to Chris: humility. He never mentioned his globe-trotting background. He never talked about his military experience (or how he decided it was his duty to serve, and left for basic training only weeks before 9/11). He doesn’t boast about his family’s lofty goals, but rather puts them into the context of a humble winemaking region.

“There are so many people showing the world that the Finger Lakes has world-class potential,” he said. “The land is right, the people are doing the work. We want to work hard and fit in.”

With one of the region’s most respected winemakers on board, they’re off to a strong start. Chris Missick could have been just about anywhere on this planet, and he has been. And he’s chosen to join his family in the Finger Lakes, the single place that excites him most.