Our son Rhys was about 16 hours old when he tasted his first wine — roughly a quarter of a drop of Champagne, sucked off the end of my pinky — in our hospital room. Our family toasted his arrival, and I attempted to plant a tiny seed that might someday germinate into true appreciation of wine.

There is a difference, of course, between wine appreciation and alcohol consumption. I’ve been thinking about how I’ll approach the subject when Rhys grows in age and maturity. Lenn and Nena Thompson have offered my wife and me a nice blueprint for guiding kids toward a love of food, and food includes wine. There is no perfect formula for raising a child who grows to loathe fast food and admire Chinon. But in this new parent’s mind, one thing is certain: The forbidden fruit mentality surrounding alcohol in this country is not doing kids or parents any favors. 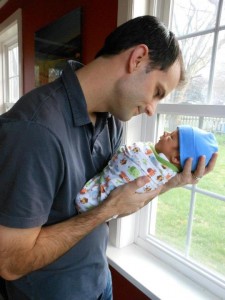 Ask yourself why anyone would want to drink any amount of Natty Ice, let alone 60 ounces of it in under an hour. It’s awful, watery stuff, but for college (and often younger) students, it’s a vessel for alcohol. And the key in that context is consumption, quickly. It’s not about appreciating what they’re drinking.

According to statistics cited by the website Empowering Parents, the average age that boys take their first drink of alcohol is now 11. For girls, it’s 13. The authors on the website view this number with great alarm. Better, they say, to find a way to keep alcohol away from kids. After all, when kids take their first drink, they’re that much closer to binge drinking!

But why do we have to make that assumption? Yes, kids will party, and kids will experiment. I don’t think any kind of parenting can absolutely guarantee that a child will never binge drink even once. As a parent, I will make mistakes. As a son, I deeply respected my mother, but on occasion I broke the rules.

However, the notion that a child’s first taste of alcohol must be delayed as long as possible seems counterproductive. I remember living on Mill Street at Ohio University my junior year, a street often referred to as Party Street. At a Thursday night kegger, an acquaintance told me something along the lines of, “My parents were SO strict in high school, but they can’t stop me now!”

Our kids grow up, and yet when it comes to alcohol, so often we treat teenagers like toddlers. No taste, no way, no how. It can’t be that surprising that college becomes a time to rebel or let loose. The shackles are off. It’s a dangerous truth for many, many kids.

That’s not to say that introducing a child to agriculture at a young age will guarantee that they only ever want a glass of riesling, not beer, and only one glass, not two (or three, or five). We’ll aim to make sure Rhys understands the many benefits of real, local food. We’ll demonstrate why wine is a kind of food to appreciate in moderation. We realize he might end up loving wine, or he might never come to embrace it. That’s fine, either way. But we will not tell him that it’s wrong to taste it, or understand it, or try to appreciate it — even before a legal age of consumption. He will not be polishing off Cote-Rotie with us into the late hours when he’s 12. But neither will he be led to believe that drinking automatically means binge drinking.

Parents, I’m new to this endeavor. I will fail often. I welcome your ideas on how to approach this subject with kids.