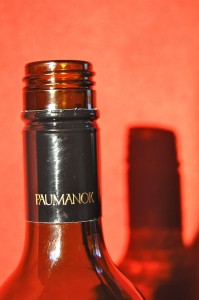 Kareem Massoud, winemaker at Paumanok Vineyards, has a thing for screwcaps. I wouldn’t say that loves them — that’d be kinda weird — but believes in them and loves talking about them. Just trying talking to Kareem for any length of time without alternative closures coming up. It’s damn near impossible.

Kareem, like his father Charles before him, takes a very thoughtful, logical approach to the family’s wines.

That rational mindset led the Massoud family to purchase a screwcap bottling line in 2007, which they used in early 2008 to bottle all of the winery’s white wines. Since then, every Paumanok white or pink wines has been bottled under screwcap — everything from the $17 Festival Chardonnay up through the $36 Grand Vintage Chardonnay.

Even the most staunch  natural cork advocates will grudgingly concede that screwcaps can be appropriate white wines (and rose) intended to be consumed early and fresh.  But for many, the jury is still out on when it comes to closing red wines under Stelvin.

The Massouds took have taken and continue to take their time with making that decision and transition as well.

Bottling Festival Red, an under-$20 drink-now blend , under Stelvin is one thing, but Kareem didn’t stop there. Since 2007 he’s bottled most of his reds under both standard natural cork and Stelvin, with the percentages varying from year to year so he can track their progress and also offer both options to his customers.

But starting with the 2010 vintage — all of the standard, non-Grand Vintage reds (known as “white label” wines to many) will be bottled entirely under screwcap.

“In addition, the majority of the 2010Assemblage will be sealed under screw cap,” Kareem said.

The decision to bottle so much of the winery’s high-end Bordeaux-style blend mostly under Stelvin closures, was the result of regular side-by-side tastings of the 2007 Assemblage under each closure.

Kareem compares tasting the two to tasting them from a 3L bottle and a regular 750ml one… with one important difference “Of course, the Stelvin finished bottle also offers the invaluable guarantee that the wine will not be contaminated by cork taint.”
[pullquote_right]So, in fact, screwcaps are the preferred closure for wines that are meant to age.”[/pullquote_right]
It’s an interesting comparison not least because collectors and those interested in watching (and tasting) how a wine develops over time are often vocal about their insistence that age-worthy reds be bottled with natural cork.
“The cork myth says that natural cork just happens to allow the ‘correct’ amount of oxygen ingress for the proper development of wine,” said Kareem.
But he feels that the same logic that applies to the aging of wine in large format bottles sealed with cork applies to screw cap finished wines.
Why? Because the tightness of the seal  and the substantial reduction in oxygen ingress essentially mimics the aging process of large format bottles sealed with cork.
“So, in fact, screwcaps are the preferred closure for wines that are meant to age,” he said in an email.
If Kareem is right, in addition to promising a clean well-preserved wine, customers  can buy a 750 ml screwcap finished bottle and expect it to develop over time in the same way one would expect a large format bottle to develop.  An interesting though, no?
“For me, one of the supreme ironies in the wine industry is that the world’s top producers whose decades-old bottles are traded at auction for thousands of dollars a bottle, continue to rely on a biodegradable cork that offers a 1-10% chance that it will ruin — not preserve — their thousand dollar bottle.”