The North Fork food community is a practical, inventive bunch. From creating chicken coops from wine barrels to using local beer for cheesemaking, members show how a local food economy should be – small, integrated and sustainable. Often, one person’s waste is another’s treasure. 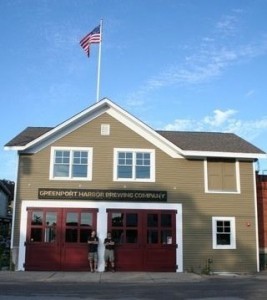 So I was not surprised to hear recently that Greenport Harbor Brewing is doing some pretty cool things with their spent grain.

For those unaccustomed to brewing, malted grain is the key ingredient used as the starch in beer. That grain is soaked and put through a series of steps to break down its sugars for the fermentation process. Once the liquid, or wort, has taken on

the grain’s sugars, it’s strained from the grain, leaving the spent grain or (in brewer speak) “draff.”

Brewers in the past have done a number of things with their spent grain, including using it as a medium for growing mushrooms and feeding it to livestock. In this tradition, Greenport Brewing sends a large amount of its spent grain to McCall Vineyard’s herd of Charolais cattle and Tweed Restaurant’s herd of buffalo. However, a small amount of the freshest grain get into the hands of LeeAnn Romanelli, tasting room employee and “official brewery baker,” for her specialty – spent-grain loaves.

“I have carte blanche to take home hot, fresh spent grain when the brewers empty the mash tun. Along with whole flour and the usual baking ingredients, I use the whole spent grain. The result is a really hearty, grainy, dense, great-tasting bread,” she says. Spent grain is known for it’s high protein content and water-soluble vitamins, which is why it’s a great source of nutrients for humans and animals.

“Our head brewer, DJ Swanson and I have mentioned in the past about making pretzels with the grain, which I think would be great too, but I decided to experiment with the bread first and it’s received rave reviews. I have always loved to bake and cook, so between the grain and the beer I’ve had the opportunity to do both. The Black Duck Porter is great for chocolate-based desserts and braised meat dishes and stews which I’ve also done,” said Romanelli, adding “Striving to be a green company, this was another great way to re-use our spent grain. The bulk of the spent grain goes to local farms to feed cattle and farm animals, so there is literally no waste of any the beer ingredients.”

The result is a really hearty, grainy, dense, great-tasting bread.”

It’s ideas like these that really excite me about the North Fork. Not only is beautiful bread being created from beer being brewed right here, but it’s all in the name of sustainability. It is yet another indication of the growing appreciation for a truly interconnected local economy.

For now, Romanelli has been selling the bread by word of mouth through the brewery, a bonus for those who go for a beer tasting. But she’s working on a label and hopefully we’ll see new Greenport Brewing baked goods throughout the North Fork. So if you’re out east this weekend, stop on by the tasting room and pick up a loaf. They’re only $5.