I have a very severe caffeine addiction.

While I’m sure illegal substances have their allure, I’ll always stick with my favorite: a steaming hot cup of speed. In the city, I have a rotation of coffeehouses I can hit when I start to droop. I also have a well-documented love affair with that green and white java chain threatening to take over America’s souls. But when on the North Fork, it feels dirty and unsupportive of our small business owners to throw money at a corporation.

But I need to feed my habit. And God forbid, I should make my own coffee EVERY morning! So through this commitment to drinking local (applied to wine as well as home made cappuccinos), I found Aldo’s in Greenport. I planted my flag and kind of thought I discovered it first, like with Moby and being vegan. But I quickly realized anyone who spends a lot of time on the North Fork nods knowingly when Aldo’s is mentioned.

Each trip to Aldo’s is a game of coffee roulette. Sometimes the coffee is perfection; sometimes it’s burned. Usually the shop is open during regular business hours and once in a while, it’s not. There’s no discernable line or system to order your drink – it’s ‘Cup a Joe’ marshal law. And the ringmaster of it all is the wild-eyed owner reminiscent of Christopher Lloyd as Doc Brown in Back to the Future. Aldo has been called “the Coffee Nazi,” modeled after the famous character in Seinfeld. He is the center of the floorshow and part of the reason we come back. He tells jokes; he bursts into song or hums loudly with whatever happens to be playing. Aldo takes your order when he’s ready and not a second before. It’s possible he’s in a business mood. You ‘ll have your beverage and be sitting in the garden staring at the water and carousel in no time. Or more likely, you will hang out in line with others desperate for a fix until Aldo decides it’s time. It should be maddening. But it’s part of the experience. 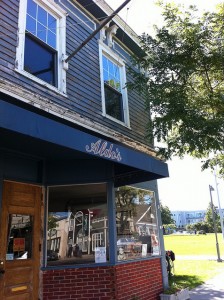 The space looks like Aldo was in the middle of a renovation but got distracted and decided to roast some beans instead. The burlap sacks are strewn about and used from wherever they landed. The antique roaster in the front window faces and
mocks the empty storefront and where Starbucks used to be. There are cans of open soda on the counter. The walls are partially painted. It should be off-putting and make the café look run down, but instead I find it charming and authentic. Would I run my business that way, no? But I alphabetize my DVDs.

Their regular cuppa is good, but their espresso is better. It’s dark and thick and stands up to milk in a macchiato or is fine on it’s own. It opens your eyes and demands you take in all Greenport has to offer. If you have a double shot, you can practically fly across the water to Shelter Island, no ferry needed. The biscotti and scones are fantastic and worth ruining your lunch if you eat both.

Aldo’s is a place that’s uniquely North Fork. There’s care and thought put into the fair trade coffee and the baked goods. But there’s also unabashed personality that fits right in and helps define local flavor. Even on days where I lose coffee roulette, I wouldn’t want it any other way.