David Page had his Newton-apple-falling-on-the-head moment in the basement bowels of a New York City restaurant.

A chef by trade, he and his wife, Barbara Shinn, traveled east from California and washed into New York City in 1990.  By 1993, they had scrounged enough money together to open Home restaurant, a rustic, cozy place that celebrates traditional American cuisine.  Soon, their 60-seat restaurant (30 inside, 30 outside) was jammed to the gills with adoring fans feasting on Skillet Fried Chicken, Whole Grilled Trout and the like.

Another restaurant would follow (Drovers Tap Room), a cookbook, prospects of more businesses in the neighborhood…it all became a blur for them as the long hours mounted up.  The New York City restaurant world can be grueling, with the long hours, the continual operational breakdowns (you ain’t seen nothing until you’ve seen plumbing from the late 1800s back up on you — trust me), and the non-stop stress of working in a city which is essentially a giant pressure cooker.

While trying to decide what salary to offer the guy who was going to tend their recently purchased vineyard in the North Fork, he thought, “why am I trying to figure out how much to pay a guy to have a better life than me?” So they got out.

Leaving Home in the capable hands of trusted colleagues, they headed east again.

Relocating to the North Fork of Long Island in 1998, they took up roots and have dived in headfirst into the tenets of sustainable living and ecologically minded farming at their new project, Shinn Estate Vineyards & Farmhouse.

On my last visit, Barbara spoke at length about her extensive readings into biodynamics (only to be interrupted by a gas-guzzling, stretch Hummer that pulled up to their driveway and belched forth a gaggle of Long Island bachelorettes on a drinking binge).  But much, much has been written about their great wines… 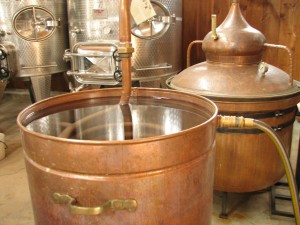 This isn’t about their grape juice.  This is about their spirits.  David has been up to some antics with a 400-liter Alembic still.  He’s continuing on a tradition of distillation in his family.  I tried (and subsequently purchased for Hearth) the Eau de Vie and the Shine.

The Eau de Vie (80 proof) is made from seyval (save-all) blanc grapes from Cayuga Lake in the Finger Lakes wine region.  Once distilled, Page ages it in 3-year old cabernet franc barrels.  How long, you ask?  He kept it in barrel until he “tasted cab franc in the distillate, and then stopped.”  With notes of cherry and cinnamon, it can be easily adapted into cocktails.

The Shine is made with the chardonnay lees from local, North Fork grapes, giving it a silky, voluptuous mouthfeel.  But be warned: its a beast.  Clocking in at the high end of the abv scale, its closer to a Grappa, in style.  This is for sipping on a cold walk at night amongst the vines.

I had the pleasure of interviewing him.  Here’s four questions with David Page about distilling in wine country:

What was it about distilling that interested you?
When I was a young boy growing up in Wisconsin my grandfather Julius Drover Jr. would often tell me tales about the prohibition-era family bootlegging operation he grew up around. Grampa was known as a “whisky farmer” in those days. He grew corn and rye on the family farm and was handy with a welding rod and hammer. He and his brothers ran whisky from Minneapolis to Chicago and everywhere between. I’ve always dreamed about having a life like grampa spoke about. I think I may be getting close to realizing it.
Is there a local group of winemakers in the North Fork also distilling?
Our farm distillery license was the first one granted on Long Island since the State Liquor Authority changed the law that previously did not allow distilling and winemaking on the same property. I have had a few visits from local winemakers who are curious about what I have been working on. I suspect that others will follow my lead and expand their operations to include distillation.
Since you’re both a chef and a winemaker, would you say distilling is closer to cooking or winemaking?
Distilling spirits is as much like winemaking as cooking. Producing a fine alembic brandy requires the use of all of my senses — just as in cooking or winemaking. The necessary skills are developed over a lifetime, but somehow I have always felt that my over 30 years as a chef have given me a bit of a jump start. I’ve been working with cider apples and wine grapes to produce my spirits, the best of which will be spending the better part of this decade aging in oak barrels. In the meantime we’ve released Shinn “Shine” a grappa- like spirit and an eau de vie aged four months in cabernet franc barrels. The response has already been tremendous, and I can’t imagine ever being able to keep up with demand.
What was a big lesson (right or wrong) you learned after diving into the process of making spirits?
I have to wake up in the middle of the night 3 or 4 times a week to fire up the still. It was a mild winter and most nights were star and moonlit. As I walk out to the barn which serves as both our winery and distillery I look up at the heavens hoping to channel a little of grampa’s distilling wisdom. If he were here to see what I have been up to I hope he would approve. The lesson in all of this? If you follow the brightest star in the sky, it just might make your dream come true.

Not a bad way to approach life…maybe I need to get out the basement office a bit more, and spend a few moments gazing at the stars above?