Saturday morning, I logged onto Facebook and was greeted with some exciting news — Rocky Point Artisan Brewers, with license now in hand, had released its first beer, a hefeweizen, at my local beer shop.

As you can see from co-owner Mike Voigt’s post, the beer moved quickly from brew day to on tap at Thrifty Beverage in Rocky Point.  It doesn’t get any fresher — or more local.  RPAB’s brewery is just a couple miles from Thrifty and from DEKS American Restaurant, where the beer is also available. 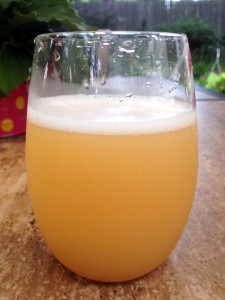 “Local” has long mattered to the RPAB team. Voigt helped organized the new Rocky Point Farmer’s Market and one of his partners, Donavan Hall, has been an important leader in the Long Island beer renaissance.  ” We wanted to open at DEKS since that’s our local pub and we have a long time craft beer relationship with the owners,” says Hall “We wanted it on the growler fill station at Thrifty because they are on Main Street in Rocky Point and we want folks in Rocky Point to be able to enjoy Rocky Point beer.”

Just a few hours after seeing Voigt’s post , I had my growler in hand — the first growler sold, according to Thrifty’s owner.

The first thing you notice when you pour Rocky Point Artisan Brewers Hefeweizen is just how cloudy it is — more so than any hefe I’ve ever tasted.

“You’ve probably not had a hefe this fresh before,” Hall told me in an email, “What happens normally is that the hefe you get will be ‘old’ and a lot of that goodness will fall out.  The beer will get clearer as a function of time.” Voight added that “Fresh hefe cannot be filtered — nor should it be. The word Hefe means yeast in German.”

Wheaty, lightly yeasty and refreshing on a hot summer afternoon, the growler didn’t last very long at my house — even my wife Nena, who is decidedly not a beer drinker — enjoyed it. Knowing that it was brewed about two miles from our house just added to our enjoyment.

The RPAB hefe is very classic. It’s not brewed with citrus, spices or a pile of hops. In a world of ‘imperial’ brews and unique ingredients, RPAB focuses instead on traditional, easy-drinking styles.

“We brew the beer we like to drink.  We also brew the beer we drink and for day-to-day drinking. The ‘extreme’ beers are just too special.  We want to make beer that anyone can enjoy anytime,” says Hall.

The hefeweizen will be available throughout the summer, and RPAB will introduce two more beers later this month — a summer lager that Hall describes as having “a little bit of wheat to give it that bright cloudiness of a summer beer” and a black lager that he says is “roasty, toasty and black as midnight.”