Now that the New York Cork Report has expanded to cover New York’s North Country wine region, it makes sense to take a look at the important and most-planted grapes. Over the next few months, we’ll look at some of the more promising grapes, starting with La Crescent.

La Crescent is an inter-specific hybrid bred by Peter Hemstad and James Luby at the Minnesota Horticultural Research Center, and is one of four very promising varieties patented and released by that project in the last 15 years.  The new vine has been available since 2002, but the story of its development goes much farther back in time. The initial cross pollination was done in 1988, then selected from the seedling program in 1992, and finally brought to market after ten years of observation, field testing and trial vinification.  While these gentlemen get rightful credit for raising this grape to the trellis, their genius did benefit from the giant upon whose shoulders they stood to reach it. 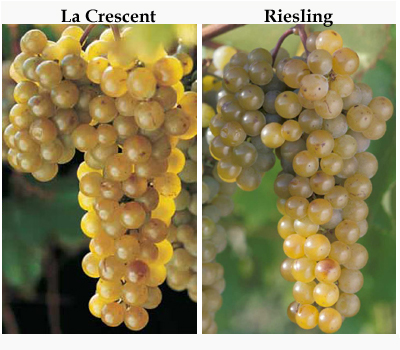 Elmer Swenson, a Wisconsin farmer, and caretaker of fruit crops for UMN, and interested initially in table grapes, is widely recognized as the pioneering grape breeder who revolutionized viticulture in cold climates.

Swenson developed an enormous amount of plant material which is a basis upon which subsequent varieties have been created.  La Crescent’s parentage comes from Swenson’s St. Pepin ( which derives from seyval blanc) crossed with the vitis vinifera Muscat Hamburg, a purple grape which itself is the offspring of Muscat of Alexandria, one of the oldest known cultivated vines.

This new member of the family tree not only presents unique winemaking characteristics, but it has proven to be cold hardy to -36F which is dozens of degrees below the kill threshold for European grape vines.

The often-touted comparison to riesling is not unwarranted, and quite compelling in some cases.  Where it can sometimes be hard to explain the novel qualities of  hybrids, La Crescent is a natural bridge experience, from a well known point of reference to tasty new territory.  Since there are many connoisseurs who think that riesling is the greatest white wine grape in the world, Jancis Robinson included, La Crescent’s comparison is flattering, but in no way an imitation.

I hope that serious wine critics  and consumers alike will not miss the opportunity to taste the beginning of something new and delicious.

On a trip to New York City with a group of experienced wine tasters, at a non-wine related seminar, we had an interesting experience.

One evening with Indian food, we had a 2010 Washington State Ch. Ste. Michele Riesling that was a peachy juicy cooling foil for the warming meal.  At another point we enjoyed a late evening cleansing with a lean apple and citrus 2010 Peter Jakob Kühn Rheingau Troken during a stop at Terroir Tribeca.  However, it was a 2010 La Crescent that I had made from a vineyard in the Lake Champlain valley that raised the excitement and level of discussion.  Floral and tangerine pith notes rising from the glass, with mid-palate burst of apricot  pit, lemon peel, and saline and stone.

One of our group was a fellow whose mother is a native of Germany, and who himself has had the good fortune to taste frequently in the homeland since he was a boy.  He may have said it best when he uttered the words, “I think that this La Crescent is a better riesling than quite a few riesling”.

Today La Crescent is being grown in a number of Northeastern and Northern Midwest states. It is either augmenting older hybrid wine production, replacing them in some vineyards, or actually being seen as a foundation block upon which new winery endeavors can be built.

Having tasted wines from several sources in the past few years, it is quite clear that good wine production is reliable and expressions are varied in their concentrations of fruit flavor, as well as ripeness and alcohol level.  In part this comes from how they present on the winemaker’s dry-to-sweet spectrum, but I cannot help but sense the difference that regions and sites make.   Having  recently opened a lively home spun 2008 La Crescent,  I am optimistic that wine crafters who embrace the qualities that promote longevity, will add another dimension to what is possible.

While other areas around the world have had decades, centuries, even millennia to determine the best places for certain fruit, we are fortunate to finally have a vine that grows well in the North Country and makes reliably good wine.  Now we just need the patience and persistence to see if we can elevate it to something even finer.

In the meantime, if you find yourself at a winery in a less traveled region of northern New York, please give La Crescent a try because consumption and feedback are essential gears in the wheels of quality and progress.