A beer-loving friend recently asked me to recommend a book on beer and food pairing. I pointed her in the direction of Brooklyn Brewery brewmaster Garrett Oliver’s classic The Brewmaster’s Table, the definitive tome on beer and food pairing. Oliver is an Old World brewer with a conviction that beer belongs at the table and, just like wine, is as important a part of a meal as the food.

I can think of no beer better suited to deliver this message than his farmhouse ale, Sorachi Ace.

Sorachi offers the spice (lots of hot pepper and a twinge of thai basil), acidity, fruit character, and liveliness of a great sparkling wine, though its earthy yeast character and razor-sharp hop finish (the beer’s name is a hop-onym, though it would work just as well in a James Bond movie title) are unique to beer. 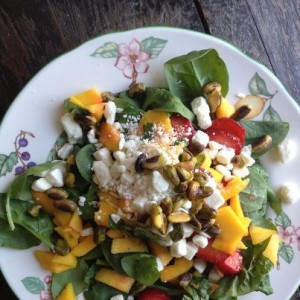 Like a poblano mimosa, Sorachi Ace would fit in beautifully with most brunch fare –– huevos rancheros or an artichoke omelette, or better yet, eggs benedict with artichoke hearts –– but that’s just the beginning. I’ve had it with Port Salut cheese, Chinese eggplant with garlic sauce and fried noodles, and greasy takeout pizza, all with wonderful results. I haven’t yet tried it with seafood, as Oliver recommends, but the lemon-twist effect of the nose makes me think the pairing would be killer. Best of all, it’s great with salad, a dish notoriously difficult to pair with wine.

Though the beer tastes great on its own, especially for hop nerds interested in the characteristics of this Japanese specialty hop, it really shines in the food realm, and I can’t say I’ve found a beer with broader pairing appeal.