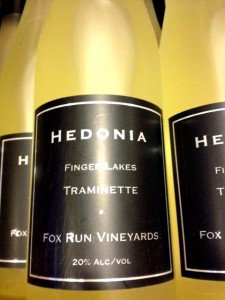 Imagine, for a moment, that McDonald’s was no longer allowed to sell French Fries because, by using the term “Fries,” the government decided that McDonald’s was luring people to over-eat and get fat. Nevermind the fact that the potatoes are, in fact, fried. Honest labeling is simply too alluring for customers.

Penalizing them for honest labeling — wouldn’t that be ridiculous?

So now try to imagine how the team at Fox Run Vineyards felt when the TTB rejected their chosen name for a new wine. That wine, a fortified white wine, was going to be called “Fortified No. 3.” That is, until the TTB decided something strange.

“We were informed that by using the word ‘fortified,’ we would convince customers that the wine would get them drunk faster,” winemaker Peter Bell explained. “That happens to be true. It’s a fact. Fortified wines have more alcohol than still wines. We expect customers to exercise moderation. But I suppose the TTB found the term to be related to heavy drinking. Why that is, I have no idea.”

The story goes back to early 2011, when Bell was working with a batch of Traminette, a hybrid grape variety designed to make wines similar to Gewurztraminer. Bell and co-winemaker Tricia Renshaw were planning to use the Traminette as a blending wine to add aromatics to other lower-priced wines in the Fox Run lineup. Bell decided to experiment; he fermented a small batch dry, then fortified it to see how it would play as a kind of white Port-style wine.

“We were surprised, and very happily so,” Bell recalls. “There was an immediate sense that we had found something special.”

With just 56 cases, Fox Run set about the process of naming the wine, labeling it, and marketing it. The marketing was easy; Bell says there was interest from various Manhattan establishments, and winery guests started ordering this new white fortified wine, hoping it would arrive by the 2011 winter holidays. Fox Run told them that would be no problem.

Seeking to get away from the colorful fox-adorned labels, Bell and Renshaw looked for something more subtle. They wanted a label that was almost austere, classy, elegant. According to Renshaw, it was Bell who came up with the first plan. 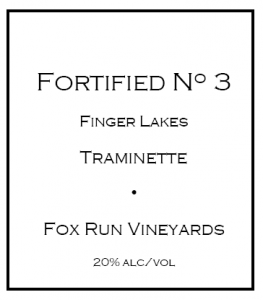 “He proposed calling it Fortified No. 3, based on the Chanel line of products,” Renshaw says. The label, which can be seen at left, evoked the raised script and simple design of Chanel perfume.

“There were added benefits of calling it Fortified No. 3,” Bell says. “For obvious reason, we wanted to get away from calling things ‘Port’. This new wine accomplished that. And it would remind our customers that we make two other fortified wines.”

Turns out the TTB would rather have Fox Run call the wine “Port” than to simply call it what it was: their third fortified wine.

“All the wind went out of our sails when the name was rejected,” Bell says. “The TTB gets a bad rap sometimes, but we generally have had no quarrels with them. It’s been easy. So this was disappointing.”

Fox Run had to inform customers that a government snafu would prevent them from getting the wine by the holidays. Manhattan customers had to wait as well. Momentum was halted as Fox Run had to come up with a new name.

Six months later, the new wine was finally approved and ready for the public. This time it was Renshaw who conjured the name: Hedonia, a made-up word meant to evoke an image of hedonism and elegance. The label is similar to the one created for Fortified No. 3.

“I suppose you could see we went from near-tragedy to success story,” Bell says with a laugh. “Tricia’s solution was brilliant. The name turns out to be a huge hit.”

The first vintage, 2010, saw only 56 cases of Hedonia. It sold out quickly at $20 for a half-bottle. Bell and Renshaw had enough faith in the product to crank up production to 700 cases in 2011.

“Maybe it’s a little bit hubristic to make that much, but it’s not going to crash in bottle if it doesn’t sell well,” Bell says. Early indications are that Fox Run won’t have trouble selling even the larger production number.

So what makes Hedonia popular? Bell and Renshaw first point to the packaging, explaining that Fox Run has had numerous customers come in and demand a bottle without even tasting it. Beyond the package, Bell and Renshaw feel that Hedonia offers the rare fortified wine that is more appropriate as an aperitif than a dessert wine.

“TTB kept telling us to just call it ‘Dessert Wine No. 3,'” Renshaw says, “but it’s not a dessert wine! Certainly people will drink it after dinner, and that’s great. But we really believe it’s more appropriate before a meal.”

Renshaw says Hedonia has the kind of freshness and zip that many fortified wines lack. “It’s stimulating. It has richness but it’s not cloying at all.”

For Bell, Hedonia has become one of the most rewarding projects in his time at Fox Run.

“One of the most thriling moments of my career was seeing the reception for this wine,” he says. “I knew it was good, but there’s really no analog for it. It was impossible to know what people would make of it. And people get it. It’s sweet but not dessert sweet. It’s snappy and mouth-cleansing.”

Bell smiles at one customer’s way of serving Hedonia: with one cube of ice and zested orange peel. The winemaker believes the orange plays well with the flavors of Traminette (the new version of Hedonia is 85% Traminette and 15% Riesling).

And what about the customers who don’t like Traminette? Renshaw says, “I was in their shoes before. I was anti-Traminette, or so I thought. I wasn’t interested in making it or drinking it. But it took a blind tasting to change my mind, where some Traminettes far outperformed some very well regarded Gewurztraminers.”

Fox Run plans to showcase Hedonia at dinners and wine events. But they will not say if they’ve sent a bottle to the folks at the TTB who so strongly objected to a little honesty in labeling. “It’s all worked out,” Bell says.