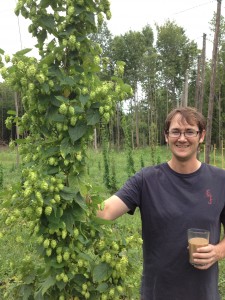 McCollum Orchards, Niagara’s new hops farm and orchard in Lockport, New York, kicked off its first commercial harvest this week with Centennial hops. Bree Bacon Woodbridge, co-owner of the farm with her husband Rich, reports that the crop “looks pretty good, all things considered. We picked several cones that are the size of my thumb.”

Woodbridge says the very hot, dry 2012 season brought “more pest pressure than last year. We were back on our heels and then were able to put in irrigation, with inline fertilizer, which helped regulate a lot. We have done a lot of hand-picking of Japanese beetles.”

Altogether they harvested 16 lbs. wet, and expect a larger harvest next year (these are second-year bines). The Woodbridges plan to begin harvesting Cascade hops next week.