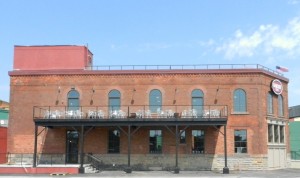 For most of its 234 year history, the Genesee Brewing Company remained a closed book to the people of Rochester, New York — an imposing, mostly corrugated metal structure on St. Paul Street from which trucks laden with beer would issue forth, but into which only brewery workers would go. No tours, no brewery store,  just a Wonka-esque factory on the hill.

The brewery’s recent purchaser, venture capital firm KPS, saw value in issuing golden tickets. They tore down the dilapidated original brewhouse and renovated an adjoining building into The Tap House visitors’ center, complete with small-batch brewery, museum and an awesomely slick pub. While this is no craft beer lover’s paradise, it’s a welcome and enjoyable addition to the Rochester beer scene.

North American Breweries (the company that owns Genesee) spared no expense in the design and construction of the Tap House. Originally held up by a preservationist movement to prohibit demolition of the old brewhouse, the project was finished in the astonishingly short time of two months. But nothing about the Tap House seems rushed or slipshod. Beautifully finished hardwoods, freshly scrubbed brick, and gleaming brass dominate in both the pub and museum area, while restored cathedral windows allow plenty of natural light.

When Genesee says ‘pub,’ they mean it. While the Tap House has a tasting room, the main bar area is a full-service restaurant, with an open kitchen, plenty of LCD tv screens, and a booming sound system. The intent is to be a dining and social destination, not just a distraction to lure people into the large, well-stocked gift shop.

You’d be hard pressed to find a pub with a better view. One of Rochester’s little geographic quirks is the enormous freakin’ waterfall in the middle of downtown, and The Tap House is perched a few hundred feet away, at the top of the Genesee River Gorge. Naturally, there’s a spacious deck with outdoor seating and a prime vantage point. 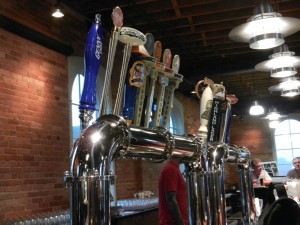 Complimenting the pub is a 30-barrel brewhouse, which, hopefully, will be used for seasonal brews and one-offs to compliment the somewhat bland line-up of Genesee, Dundee, Blue Point and Pyramid beers on tap. This small brewhouse should offer Genesee’s brewers the small-batch flexibility to demonstrate the can hang with the best beermakers in the area.

It remains to be seen whether Rochesterians will regularly decide to go off the beaten track to the Tap House, which is located on the brewery grounds, well out of the way of the main entertainment districts, but the brewery has certainly done its part to make locals feel welcome. The Tap House should be a good draw for any beer pilgrims visiting the city.

Those searching for Russian Imperial Stouts and intense IPAs might be disappointed but, if you’re happy with traditional American beers, or more widely accessible craft beers, you’re in for more than a treat.