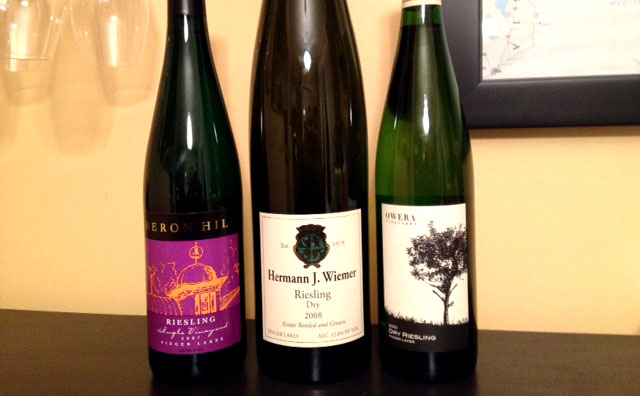 The other day I picked up a magnum of Hermann J. Wiemer 2008 Dry Riesling in magnum. It had me thinking:

Magnums are so sexy.

How come almost no one in the Finger Lakes offers riesling in magnum?

I was going to say that no one in the Finger Lakes bottles their wine in larger formats, but of course that’s wrong. You can find Red Cat in magnum. Fox Run’s Ruby Vixen, , Arctic Fox, Chardonnay perhaps. Some of Bully Hill’s offerings, I’m sure.

But why not riesling? After all, the world’s finest riesling ages gracefully for many years, and plenty of those wines improve with age. In a larger format, less oxygen makes contact with the wine, giving it potentially an even longer life. And with a group of friends who appreciate wine, there are few aesthetic pleasures that eclipse the uncorking of a magnum.

Then there is another issue here. The Finger Lakes aims to be a region taken seriously by the wine world, a region that is considered “world class,” whatever that nebulous designation entails. And yet the producers in this region don’t share their other-region colleagues’ ambition to create wines that shine in larger formats, destined for special evenings many years later. Shouldn’t that change?

“We have a segment of our clientele that asks for our wine in magnum,” says Fred Merwarth, owner and winemaker at Hermann J. Wiemer. “It’s not all of our customers or even most. But we want to provide what our customers want, and these are customers who are used to collecting wine this way. Maybe they have magnums of Bordeaux or Burgundy. We’re thrilled they want our wine in a larger format.”

I asked a range of Finger Lakes industry professionals why they don’t bottle even a small amount of their riesling in magnum. Their answers vary, and are instructive. The most common response was that magnums are party bottles, not generally taken seriously. Obviously, I think this is misguided, as it ignores the category of consumer that wants fine wine in magnum. Certainly the Red Cats of the world are made for value formats, but that’s wholly different than a carefully grown and made riesling.

[quote]We want to provide what our customers want. These are customers who are used to collecting wine this way.[/quote]

I wonder: Does Chateau Latour think magnums cheapen their product? How about Cheval Blanc? Mayacamas in Napa Valley? Grange in Australia? DRC?

But Marks is hardly alone. His Atwater winemaker Vinny Aliperti, who also owns Billsboro Winery, says we don’t see much local riesling in magnums in part because of “perception — mags are ‘party wines,’ more bang for the buck.” Aliperti adds, “Price point is a biggy. It is hard to compete in the marketplace with a magnum over $14. For most of us smaller wineries, that formula doesn’t add up financially.”

Building on the magnum-as-party-bottle point, Nancy Irelan of Red Tail Ridge says, “My experience has been that most whites on the market in magnums (aside from bubbles) have been value products rather than premium and ultra-premium. It seems more usual to see high-end red wines in magnum.”

Chris Stamp of Lakewood Vineyards focuses on what his customers are paying. “With mags come an expected price point that I’m not willing to meet until we really have an excess beyond what we can sell in 750 milliliter bottles,” he explains.

Regarding the Fox Run wines in larger format, owner Scott Osborn explains, “The purpose is twofold. In the case of chardonnay we make them for the restaurants who pour a lot of wine by the glass. It makes it easier to open one bottle instead of two. In the case of Arctic Fox and Ruby Vixen, it was mostly because of demand from the liquor stores.”

So why not riesling? Osborn says, “We don’t make enough riesling to put in mags because it will cannibalize the regular bottle sales and probably cause us to be out-of-stock.”

There is no question that riesling in magnum can be a pain for the producer, particularly if they want to use the classic riesling-shape bottle known as a hock. Merwarth says that he and the staff at Wiemer have to do everything by hand when they put together roughly 500 magnums of Wiemer Dry Riesling. “We have to bottle by hand. We cork the bottles by hand,” he says. “It’s very time-consuming, very labor-intensive. But we think it’s worthwhile. There is no question that wines can last longer in magnum, and we have customers who want to lay our wines down. Magnum is the ideal format for that.”

Typically, magnums sell for more than just double the regular bottle price. That’s due to the labor involved, and because the wines are better protected for longer aging. Wiemer charges $48 per magnum of Dry Riesling, compared to $18 for a regular bottle. “They move very quickly after we release them,” Merwarth says, noting that some of the magnums make their way to Manhattan shops and restaurants. “We enjoy seeing them side-by-side with magnums from Alsace or elsewhere.”

It’s a point of regional pride. I have learned not to admonish business owners on how to conduct their affairs — or at least, I try to remember that it’s not my skin in the game. But I would simply offer that there are two separate categories of large-format wines: the party kind that features cats in hot tubs and women on motorcycles, and the ageworthy kind that hold some of the world’s finest. When Finger Lakes winemakers say, “The world should take us seriously,” I look at the magnum debate and think, “You should have the confidence to take yourself more seriously!”

Bob Madill, general manager at Sheldrake Point, indicates that practices can change. Why not offer riesling in magnum? “I am not sure why, other than we do not have the habit,” he says. “Your suggestion is a good one and we should start bottling some riesling in the large formats.”

Sounds like the start of a new kind of party. No critters wearing bathing suits invited.