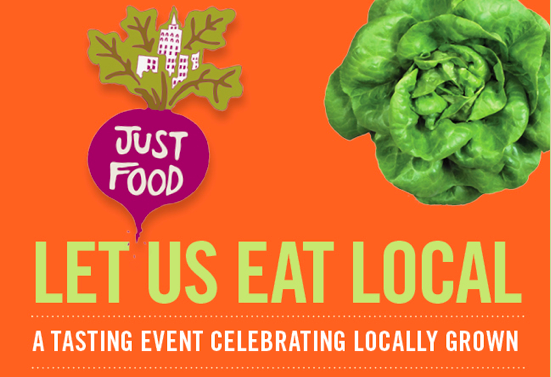 For those who spend their disposal income on the edible artistry of Manhattan’s best chefs, Just Food’s Fifth Annual Let Us Eat Local was like being inside Willy Wonka’s Fancy Fall Food Factory. The event benefited non-profit, Just Food, which keeps civilians in five boroughs of New York City connected with farms and local products. They engage the community by teaching how to grow and identity healthy food through CSAs, classes, outreach and Farm School, a program giving students a framework to grow produce in the concrete jungle.

Forty restaurants rolled out dishes for a walk-around tasting using seasonal ingredients from nearby purveyors that the well-dressed supporters of the cause happily sampled and dug in to with compostable utensils. New York-based breweries set up camp next to five of the Finger Lakes and Long Island wineries we know and love.

Because what’s a party without local aperitifs?

It was almost overwhelming to see all of the talent and tremendous cornucopia (look! I’m seasonal too!) of delectable bites in one place. Luckily for all, I was brave and persevered. And paced myself. While it’s pretty mean to brag about the amazing plates we had the opportunity to shove in our faces, here are some of my favorites from the night: 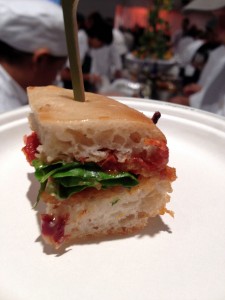 Bread Alone Bakery, hailing from the Catskills presented assorted goodies made with wheat sourced from the Finger Lakes. These carbohydrate magicians found a way to bring through flavors in their soft bread almost making me ignore the insane French butter slathered on top. Almost.

Almond, a restaurant doubly deserving mention with locations on the South Fork and Manhattan, served up Tomato Soup with Polenta and Mascarpone. Chef Jason Weiner knew this appetizer would be a fan favorite invoking childhood memories using the last of the season’s tomatoes, but expected the chilly October weather to accompany this updated comfort food. “Who knew it was going to be 75 degrees?”

Down at The Darby/Butter booth, Chef Ian submitted another classic. The BLT. Insanely rich and perfect pork sourced from Mosefund Farm in Branchville, NJ filled the ‘B’ requirement in the sandwich. Mosefund’s Mangalista Pigs are pretty damn delicious and can be found in some of Manhattan’s best (Osteria Morini, Atera) or http://www.mosefund.com/ for home chefs.

Hundred Acres chef RL King doesn’t just cook with fresh produce, he wears it. His tattoo sleeve, a potpourri of veggies on the vine, impressed patrons as much as his dish: Broccoli, Carolina Rise and Cheddar Custard topped with Bacon Jam. Plated in shells of local organic eggs and returned to the carton, Hundred Acres got points for presentation and easiest compostable serving vessel.

Dessert. I only had eyes for First Place Pies. It turns out judges Melissa Clark, Johnny Iuzzini, Ed Levine and Josh Ozersky agreed with me – or at least took the bakery’s name seriously as they were awarded ‘Judge’s Favorite’ with their Candy Apple Pie. New York is the Empire State after all. 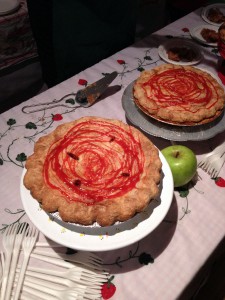 On to the liquid portions of the evening!

Many brewery reps and I chatted about the lack of hops growing in New York State. Working with the Brewers Association, they’re hoping to change that and have enough home grown hops to go around. The sudsy standout of the night was Clinton Hill’s Keslo Beer Co. A keg only business as of now, their Sour Quad was worth the wait for my turn at the tap. Barrel aged for 3 months, the strong but not overwhelming beer had a hint of oak with an incredibly dry finish.

I enjoyed the nicely structured, but young 2011 Riesling from Brooklyn Winery.  Speaking with founder John Stired, I was pleasantly surprised to hear that a good amount of their grapes come from well-known Long Island vineyards. In years past, merlot from Sherwood House Vineyards and Mudd, while their cabernet franc grapes are purchased from Pellegrini. I’m looking forward to visiting them sooner rather than later to have an opportunity to taste these reds, along with their Zinfandel*. (Grown in California, but still cool.) 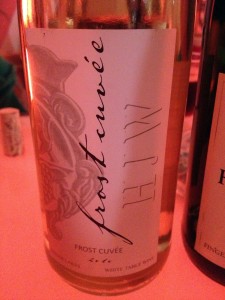 Down from Mattituck, David Page and Barbara Shinn were officially pouring their 2009 Merlot, 2009 Wild Boar Doe and the 2011 Coalescence and Chardonnay. But for those in the know there were a few additional wines available. I really enjoyed the 2010 Pinot Blanc, which inexplicably I hadn’t tasted before. The creamy wine comes from a 1/2 acre at Shinn Estate Vineyards where it sees 15 months in the barrel with wild yeast. A pear on the nose, this serious white coats the tongue and stays with you long after the finish. I found it a good match for autumn-centric dishes I balanced in my other hand. Especially Great Performances’ Roasted Butternut Squash and Caramelized Onion Tart.

Ravines Wine Cellars had many visitors paying homages to their fantastic and well publicized 2011 Dry Riesling. A wine light on the nose as it gives you a white floral and stone fruit marriage. I’d wear it as a perfume, I would.

Bedell Cellars served quite a few bottles of their 2009 Merlot and 2011 Chardonnay and Red Newt Cellars showed their 2011 ‘Circle’ Riesling and 2011 Gewurztraminer, my favorite of the two with citrus and floral flavor we’ve come to expect of the grape and their winery.

Hermann J. Wiemer Vineyard poured their Dry Riesling, which was delicious as always, but the fan favorite last night was the Frost Cuvee. A medium bodied Gewurztraminer and Riesling blend had pear notes with a hint of lychee and many repeat customers. 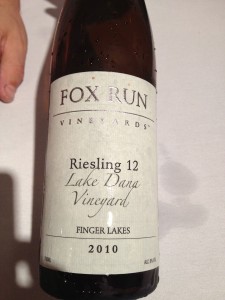 The big WOW came from Fox Run Vineyards. 2009 Lemberger with its berry nose and peppery finish seemed to be the red in most guests’ glasses. Delicious but winemaker Tricia Reinshaw’s “secret” wine, the 2010 Riesling 12 Lake Dana Vineyard would be my favorite wine of the night. After we rescued it from it’s hiding place behind the counter, my jaw dropped when Tricia reveled this sweet wine contained 6.4% residual sugar. Maybe I was on a sugar high from the Candy Apple Pie, but I LOVED it. (And we know I loyal to dry wines.) The biting acid balanced the fresh wine perfectly but didn’t blow out the delicate apricot and peach flavors.

The benefit was a wonderfully run evening for a fantastic cause. Until you purchase your tickets for next year, there are still ways to get involved.

Visit http://www.charitybuzz.com/auctions/JustFood/ to get in on the silent action going on until October 16th.

There’s also Just Food’s 100 Harvest Dinners initiative, a program encouraging supporters to get together on their own time and make the season with food related events. For more details: http://www.justfood.org/events/how-be-harvest-dinner-host