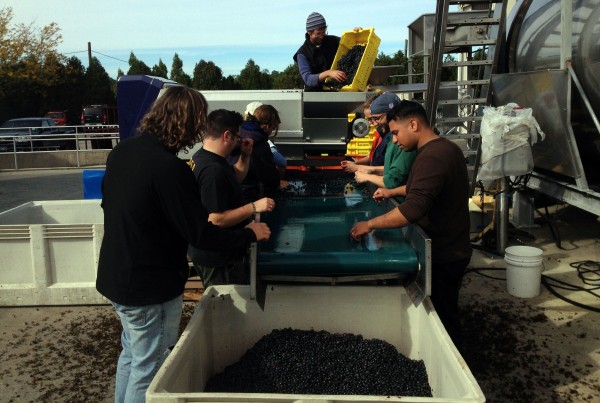 Almost a week later, I still have purple stains under my finger nails and my back still spasms a bit if I stand just so. It’s simple math, really — take a 6’3″ out-of-shape guy, make him bend over a sorting table for five hours and you’re virtually guaranteed these sorts of short-term annoyances.

But, standing at that table, hands cold and sticky with sweet cabernet franc juice and pulp, plucking green stems (and a little rot here and there) from the belt, talking about everything from the latest presidential debate to school lunches to harvesting chickens, with a group of like-minded, mostly winery and restaurant folks was a comforting and exhilarating escape from my normal cubicle-dweller work life.

Would it be the same if I were doing it all day, every day for a month, as I’d need to if I worked at a winery full time? No. Probably not.

But I feel strongly that wine writers should do as many winery jobs as possible to truly understand the work and effort that goes into making quality wine. So, helping Anthony and Sarah Nappa of Anthony Nappa Wines sort just under three tons of cabernet franc grapes — grapes sourced from Reilly Vineyards on the North Fork and destined to become Anthony Nappa Wines 2012 Bordo — was my pleasure, no matter how back-breaking the work.

Sorting grapes probably sounds pretty easy. You stand next to a conveyor belt and pull anything green, rotten or otherwise not tasty off of the belt and discard it. But here’s the other thing — even once you get over the monotony, get into a rhythym, and your eyes adjust and get attuned to picking out the MOG (matter other than grapes)… the grapes just keep coming. And coming. And coming.

I think the hours will be worth it once the wine is in the bottle and ready for drinking, and many of the state’s top wineries must feel that way too. They hand sort extensively.

We’re still a couple weeks away from publishing our final 2012 harvest reports, but from what I’ve heard red wine grape quality was inconsistent across Long Island, with sugar levels and yields generally lower than expected.

This cabernet franc was slightly riper than most I’ve heard about — coming in between 22 and 23 brix — with good flavors, though admittedly I’m no expert on what flavors to look for in just-picked grapes. The stems were still quite green — which is why we were hand sorting — but the seeds were mostly crunchy and brown, a good sign.

Anthony makes his wines at Premium Wine Group, an important custom-crush facility on the North Fork. Without it, there’d be a lot fewer Long Island wine brands. I’m not sure there is such a thing as a typical Premium customer, but many of the brands made there are much larger than Anthony and Sarah’s. That scale was obvious all around us as other winemakers processed a whole lot more fruit in a much shorter period of time. The place was buzzing, almost chaotic at times, with fruit coming in all afternoon. But there we were, hand sorting this (relatively) small amount of cabernet franc. The only ones hand sorting. And not moving nearly as quickly as those around us. I’d never thought about it before, but that’s the great thing about Premium, you can make a lake of wine there with the most modern of equipment, or you can make a few hundred cases by hand, like Anthony and Sarah.

I’ve admired and respected the Nappas for years, but it’s always been about more than Anthony’s hands-off winemaking style — and even the consistent food-friendly deliciousness of their wines. They see the development and growth of Long Island’s food and wine culture — and community — as vital to the success of the region. It’s important to them, and it helps direct everything that they do.

At their co-operative tasting room, The Winemaker Studio,  they pour private label wines from several winemakers as well as a rotating number of wines from other wineries. And, by design, the place has become an after-work hangout for many in the industry.

And so, when Sarah posted last week on Facebook that they needed some help sorting grapes, they quickly found themselves with a group of friends willing to give up their afternoon for nothing more than some beer, pizza and the chance to spend time together.

It might seem like a brilliant idea to get your friends to do labor for you. It’s free right? Think again.

“A group of harvest workers would probably have been cheaper then a group of friends on the sorting table after all the pizza and beer. But it was so much fun!” Anthony told me, adding “…and it takes a lot of beer to make great wine!”

I think it’s safe to say that it also takes a lot of friends to make great wine. And that’s just one reason why community matters to the Nappas.